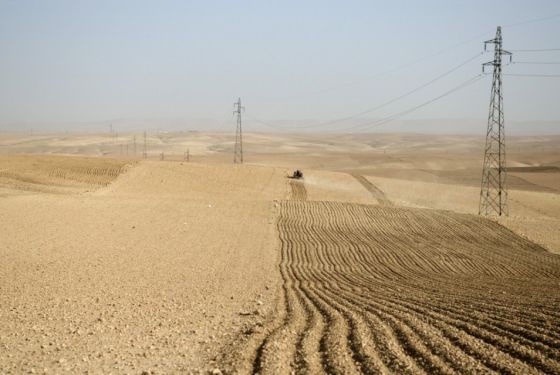 The Syrian drought has displaced more than 1.5 million people, with subsistence farmers losing up to 90% of their income.

Shahrzad Mohtadi writes: Two days short of Egyptian leader Hosni Mubarak’s resignation, Al Jazeera published an article, headlined “A Kingdom of Silence,” that contended an uprising was unlikely in Syria. The article cited the country’s “popular president, dreaded security forces, and religious diversity” as reasons that the regime of Bashar al-Assad would not be challenged, despite the chaos and leadership changes already wrought by the so-called Arab Spring. Less than one month later, security forces arrested a group of schoolchildren in the Syrian city of Dara’a, the country’s southern agricultural hub, for scrawling anti-government slogans on city walls. Subsequent protests illustrated the chasm between the regime’s public image — encapsulated in the slogan “Unity, Freedom and Socialism” — and a reality of widespread public disillusion with Assad and his economic policies.

Among the many historical, political, and economic factors contributing to the Syrian uprising, one has been devastating to Syria, yet remains largely unnoticed by the outside world. That factor is the complex and subtle, yet powerful role that climate change has played in affecting the stability and longevity of the state.

The land now encompassed by Syria is widely credited as being the place where humans first experimented with agriculture and cattle herding, some 12,000 years ago. Today, the World Bank predicts the area will experience alarming effects of climate change, with the annual precipitation level shifting toward a permanently drier condition, increasing the severity and frequency of drought.

From 1900 until 2005, there were six droughts of significance in Syria; the average monthly level of winter precipitation during these dry periods was approximately one-third of normal. All but one of these droughts lasted only one season; the exception lasted two. Farming communities were thus able to withstand dry periods by falling back on government subsidies and secondary water resources. This most recent, the seventh drought, however, lasted from 2006 to 2010, an astounding four seasons — a true anomaly in the past century. Furthermore, the average level of precipitation in these four years was the lowest of any drought-ridden period in the last century.

While impossible to deem one instance of drought as a direct result of anthropogenic climate change, a 2011 report from the National Oceanic and Atmospheric Administration regarding this recent Syrian drought states: “Climate change from greenhouse gases explained roughly half the increased dryness of 1902-2010.” Martin Hoerling, the lead researcher of the study, explains: “The magnitude and frequency of the drying that has occurred is too great to be explained by natural variability alone. This is not encouraging news for a region that already experiences water stress, because it implies natural variability alone is unlikely to return the region’s climate to normal.” The Intergovernmental Panel on Climate Change predicts that global warming will induce droughts even more severe in this region in the coming decades.

It is estimated that the Syrian drought has displaced more than 1.5 million people; entire families of agricultural workers and small-scale farmers moved from the country’s breadbasket region in the northeast to urban peripheries of the south. The drought tipped the scale of an unbalanced agricultural system that was already feeling the weight of policy mismanagement and unsustainable environmental practices. Further, lack of contingency planning contributed to the inability of the system to cope with the aftermath of the drought. Decades of poorly planned agricultural policies now haunt Syria’s al-Assad regime.

Hafez al-Assad — the father of the current president, Bashar al-Assad — ruled Syria for three decades in a fairly non-religious and paradoxical way. To some degree, he modernized the nation’s economy and opened it to the outside world; at the same time, his regime was infamous for repression and the murder of citizens. The elder al-Assad relied on support from the rural masses to maintain his authority, and during his rule, the agricultural sector became one of the most important pillars of the economy. In a 1980 address to the nation, he said: “I am first and last — and of this I hope every Syrian citizen and every Arab outside of Syria will take cognizance — a peasant and the son of a peasant. To lie amidst the spikes of grain or on the threshing floor is, in my eyes, worth all the palaces in the world.” Hafez al-Assad assured the Syrian people of their right to food security and economic stability, granting subsidies to reduce the price of food, oil, and water. The regime emphasized food self-sufficiency, first achieved with wheat in the 1980s. Cotton, a water-intensive crop requiring irrigation, was heavily promoted as a “strategic crop,” at one point becoming Syria’s second-largest export, after oil. As agricultural production swelled, little to no attention was paid to the environmental effects of such short-term, unsustainable agricultural goals.

With a steadfast emphasis on quick agricultural and industrial advancements, the Baathist regime did little to promote the sustainable use of water. As Francesco Feria and Caitlin Werrell state: “The al-Assad regime has, by most accounts except their own, criminally combined mismanagement and neglect of Syria’s natural resources, which have contributed to water shortages and land desertification.” [Continue reading…]