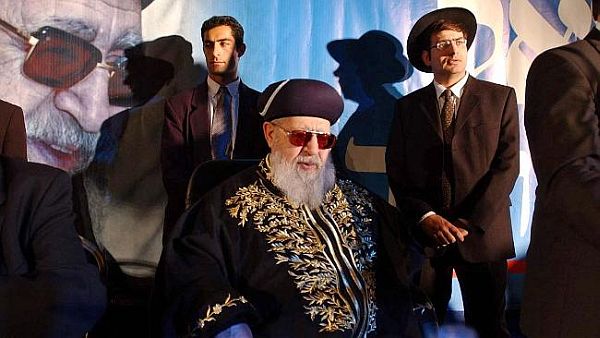 Some want the 91-year-old rabbi to support it, others to oppose it. At least one visit, in which the rabbi was briefed on Iran’s nuclear program, came at the behest of Prime Minister Benjamin Netanyahu, who is battling for support in the cabinet to strike Iran.

Yishai reportedly objects to an Israeli attack on Iran in the current circumstances, although he has not made his position clear in public.

It is not known whether Amidror or any of the others succeeded in persuading Yosef. However, on Saturday evening, a day after his meeting with Amidror, Yosef said in his weekly sermon: “You know what situation we’re in, there are evil people, Iran, about to destroy us. … We must pray before [the almighty] with all our heart.”

Two years ago Yosef was very blunt in expressing his visceral contempt for non-Jews. The Jerusalem Post reported:

The sole purpose of non-Jews is to serve Jews, according to Rabbi Ovadia Yosef, the head of Shas’s Council of Torah Sages and a senior Sephardi adjudicator.

“Goyim were born only to serve us. Without that, they have no place in the world – only to serve the People of Israel,” he said in his weekly Saturday night sermon on the laws regarding the actions non-Jews are permitted to perform on Shabbat.

According to Yosef, the lives of non-Jews in Israel are safeguarded by divinity, to prevent losses to Jews.

“In Israel, death has no dominion over them… With gentiles, it will be like any person – they need to die, but [God] will give them longevity. Why? Imagine that one’s donkey would die, they’d lose their money.

This is his servant… That’s why he gets a long life, to work well for this Jew,” Yosef said.

“Why are gentiles needed? They will work, they will plow, they will reap. We will sit like an effendi [master] and eat.

That is why gentiles were created,” he added.

I guess from Yosef’s perspective Americans are useful because we pay taxes that help support Israel, but Iranians? It sounds like they would fall into the category of Goyim who “have no place in the world.”

This comes from a spiritual leader in the only nuclear-armed nation in the Middle East and yet we are told it’s the “mad mullahs” we are supposed to worry about.

Who knows what pronouncement Yosef might make. What’s scary is that he’s even been asked.