Jeff Stein reports: Gwenyth Todd had worked in a lot of places in Washington where powerful men didn’t hesitate to use sharp elbows. She had been a Middle East expert for the National Security Council in the Clinton administration. She had worked in the office of Defense Secretary Dick Cheney in the first Bush administration, where neoconservative hawks first began planning to overthrow Iraqi dictator Saddam Hussein.

But she was not prepared a few years later in Bahrain when she encountered plans by high-ranking admirals to confront Iran, any one of which, she reckoned, could set the region on fire. It was 2007, and Todd, then 42, was a top political adviser to the U.S. Navy’s 5th Fleet.

Previous 5th Fleet commanders had resisted various ploys by Bush administration hawks to threaten the Tehran regime. But in spring 2007, a new commander arrived with an ambitious program to show the Iranians who was boss in the Persian Gulf. 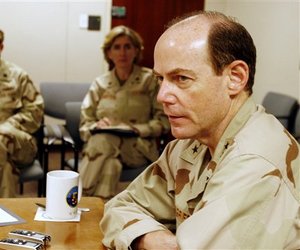 Vice Adm (Ret) Kevin J. Cosgriff now sits on the board of the Washington DC think tank, the Stimson Center.

Vice Adm. Kevin J. Cosgriff had amassed an impressive résumé, rising through the ranks to command a cruiser and a warship group after the Sept. 11, 2001, terrorist attacks. Following a customary path to three stars, he had also spent as much time in Washington as he had at sea, including stints at the Defense Intelligence Agency and as director of the Clinton White House Situation Room.

“There was a feeling that the Navy was back on its heels in dealing with Iran,” according to a Navy official prohibited from commenting in the media. “There was an intention to be far more aggressive with the Iranians, and a diminished concern about keeping Washington in the loop.”

Two people who were there said Cosgriff mused in a staff meeting one day that he’d like to steam a Navy frigate up the Shatt al Arab, the diplomatically sensitive and economically crucial waterway dividing Iraq and Iran. In another, they said, he wanted to convene a regional conference to push back Iran’s territorial claims in the waterway, a flash point for the bloody Iran-Iraq war in the 1980s.

Then he presented an idea that not only alarmed Todd, but eventually, she believes, launched the chain of events that would end her career.

Cosgriff declined to discuss any of these meetings on the record. This story includes information from a half-dozen Navy and other government officials who demanded anonymity because of the sensitivity of the matter, many parts of which remain classified.

According to Todd and another witness, Cosgriff’s idea, presented in a series of staff meetings, was to sail three “big decks,” as aircraft carriers are known, through the Strait of Hormuz — to put a virtual armada, unannounced, on Iran’s doorstep. No advance notice, even to Saudi Arabia and other gulf allies. Not only that, they said, Cosgriff ordered his staff to keep the State Department in the dark, too.

To Todd, it was like something straight out of “Seven Days in May,” the 1964 political thriller about a right-wing U.S. military coup. [Continue reading…]