Glenn Greenwald writes: The rightwing transparency group, Judicial Watch, released Tuesday a new batch of documents showing how eagerly the Obama administration shoveled information to Hollywood film-makers about the Bin Laden raid. Obama officials did so to enable the production of a politically beneficial pre-election film about that “heroic” killing, even as administration lawyers insisted to federal courts and media outlets that no disclosure was permissible because the raid was classified.

Thanks to prior disclosures from Judicial Watch of documents it obtained under the Freedom of Information Act, this is old news. That’s what the Obama administration chronically does: it manipulates secrecy powers to prevent accountability in a court of law, while leaking at will about the same programs in order to glorify the president.

But what is news in this disclosure are the newly released emails between Mark Mazzetti, the New York Times‘s national security and intelligence reporter, and CIA spokeswoman Marie Harf. The CIA had evidently heard that Maureen Dowd was planning to write a column on the CIA’s role in pumping the film-makers with information about the Bin Laden raid in order to boost Obama’s re-election chances, and was apparently worried about how Dowd’s column would reflect on them. On 5 August 2011 (a Friday night), Harf wrote an email to Mazzetti with the subject line: “Any word??”, suggesting, obviously, that she and Mazzetti had already discussed Dowd’s impending column and she was expecting an update from the NYT reporter.

A mere two minutes after the CIA spokeswoman sent this Friday night inquiry, Mazzetti responded. He promised her that he was “going to see a version before it gets filed”, and assured her that there was likely nothing to worry about:

“My sense is there a very brief mention at bottom of column about CIA ceremony, but that [screenwriter Mark] Boal also got high level access at Pentagon.”

She then replied with this instruction to Mazzetti: “keep me posted”, adding that she “really appreciate[d] it”. 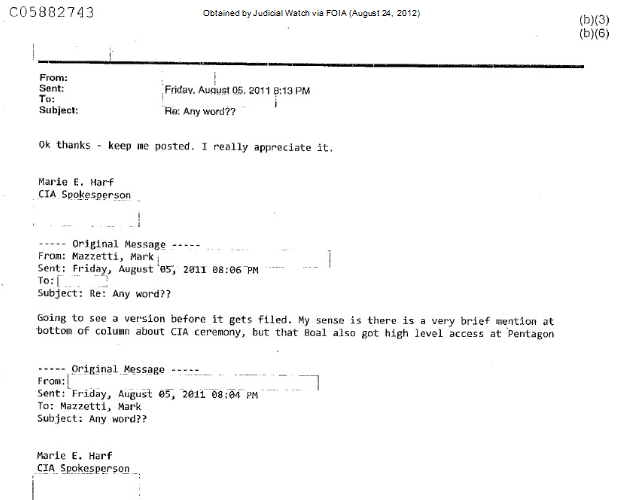 Moments later, Mazzetti forwarded the draft of Dowd’s unpublished column to the CIA spokeswoman (it was published the following night online by the Times, and two days later in the print edition). At the top of that email, Mazzetti wrote: “this didn’t come from me … and please delete after you read.” [Continue reading…]

Mazzetti has told the Times’ public editor Arthur Bisbane, “I did make a bunch of calls and was doing this on deadline. As part of the process, I also did send the column [to the CIA]. It was definitely a mistake to do. I have never done it before and I will never do it again.”

Mazzetti was working on a deadline. So? He’s a reporter. That’s what reporters do.

Still, he’s acknowledged his mistake — but which one? Sending the column to the CIA? Or asking them to cover it up?

Then to cap the damage control he offers this assurance: he never did it before and will never do it again.

This is coming from a journalist who didn’t just get caught colluding with the CIA. He also got caught trying to cover up the evidence. And now he wants everyone to believe this was a one-time offense.

On the contrary, it sounds more like the kind of mea culpa one might expect from a serial liar. After all, he could merely have acknowledged this “mistake” without trying to portray himself as a choir boy.

Executive Editor Jill Abramson and Managing Editor Dean Baquet both went out of their way to minimize what Mazzetti did. If it turns out that he is really a serial offender, all three of them should get fired.