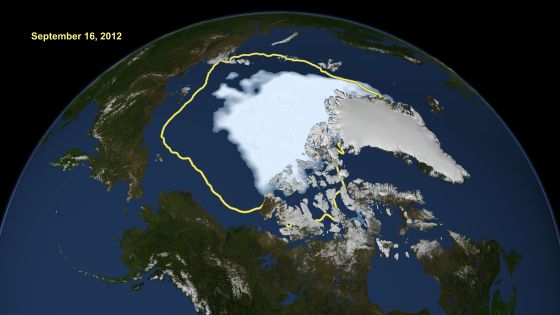 Satellite data reveal how the new record low Arctic sea ice extent, from Sept. 16, 2012, compares to the average minimum extent over the past 30 years (in yellow). NASA/Goddard Scientific Visualization Studio

In the Irish Times, John Gibbons writes: It is difficult to overstate the magnitude of what is currently unfolding in the Arctic region

THE TRUTH, as Winston Churchill put it, is incontrovertible. “Malice may attack it, ignorance may deride it, but in the end, there it is.” Scrape away the layers of denial, obfuscation and spin that cloud climate change and one unvarnished truth emerges: the Arctic ice cap is dying – and, with it, humanity’s best hopes for a prosperous, predictable future.

In the most dramatic reconfiguration of the map of the world since the end of the last Ice Age, the Arctic ice cap is now committed to accelerated collapse.

In 2007, the intergovernmental panel on climate change warned that, unless emissions were drastically curbed globally, the Arctic ocean could be clear of summer sea ice towards the end of this century.

They were hopelessly optimistic. On September 16th last, Arctic sea ice hit its lowest level ever recorded, at 3.41 million sq km, barely half the 1979-2000 average. The area of sea ice lost is 41 times larger than the island of Ireland. While the drop in sea ice extent is alarming, the 72 per cent decline in its volume is worse. Not only is ice cover shrinking, the surviving ice is thinning precipitously.

Prof Peter Wadhams of the Polar Ocean Physics Group described the September 2012 figures as a “global disaster”. He now projects the destruction of Arctic summer sea ice by 2015-16 – more than half a century ahead of the IPCC’s projections. “The final collapse towards that state is now happening and will probably be complete by those dates,” he added.

It is difficult to overstate the magnitude of what is now unfolding in the Arctic region. The Arctic ice cap used to cover 2 per cent of the Earth’s surface, and the ice albedo effect meant vast amounts of solar energy were bounced back into space from the bright white ice mass.