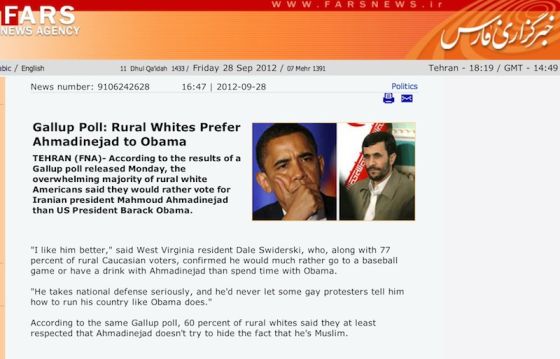 The Onion: According to the results of a Gallup poll released Monday, the overwhelming majority of rural white Americans said they would rather vote for Iranian president Mahmoud Ahmadinejad than U.S. president Barack Obama. “I like him better,” said West Virginia resident Dale Swiderski, who, along with 77 percent of rural Caucasian voters, confirmed he would much rather go to a baseball game or have a beer with Ahmadinejad, a man who has repeatedly denied the Holocaust and has had numerous political prisoners executed, than spend time with Obama. “He takes national defense seriously, and he’d never let some gay protesters tell him how to run his country like Obama does.” According to the same Gallup poll, 60 percent of rural whites said they at least respected that Ahmadinejad doesn’t try to hide the fact that he’s Muslim.

For more on this story, please visit our Iranian subsidiary organization, Fars😉