Syria Comment: Aleppo and Damascus are the two geese that lay Syria’s golden eggs. The revolutionaries must take them from the regime. The problem is that the regime cannot allow the opposition to have them alive. It will have to kill the golden geese rather than give them alive to the enemy. Both sides will grind Syria’s two commercial and political capitals into dust rather then permit the other side to own them and harvest their golden eggs. Aleppo and Damascus produce much of Syria’s wealth. Even more importantly they are the two centers that extract that wealth from the rest of the country. During Ottoman times, it has been estimated that taxes on peasants were 4 times higher than on city dwellers.

The country folk that have fought much of this rebellion waited for a Tahrir Square moment. They waited for the city people to rise up and come to their aid. Unfortunately, Aleppo and Damascus did not rise up or couldn’t. Over the last several months the revolutionaries have been taking the revolution to the cities. They cannot be allowed to sit out this revolt or the regime will win. Amn wa Istiqrar – security and stability – has been the montra of this regime for 40 years. The revolution cannot allow it to go on. By taking the fight to the city centers, they will deny the wealthier urbanites the security and safety they have always been willing to settle for.

There is a strong class element to this struggle. It is not only about sect and religion. For the rural Syrians that make up so much of the militias, destroying the city centers is a price that they must extract to set the city folk on fire. Of course Assad’s army cannot allow the cities to pass into the hands of the opposition. Whoever owns the cities, owns Syria. 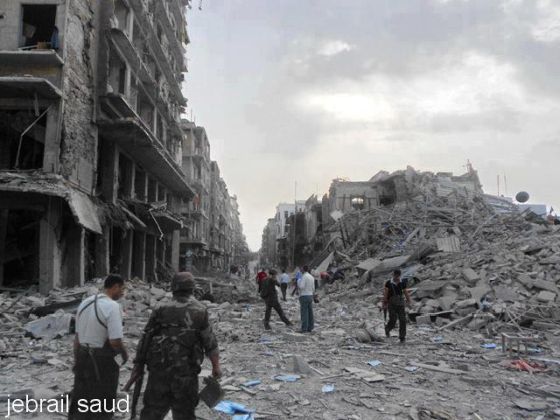 Two car bombs rocked Saadallah al-Jabri Square in Aleppo, causing much damage and death. 40 reported dead so far. VOA story. The obliterated building to the right of the picture is a well known coffee shop that occupies the corner of the street facing the Siyahi hotel, which is seen at the left of the picture. The real target, however, was undoubtedly the “officers club” or “nadi Al-zubbat” which is located directly to the right of the coffee shop. Other pictures of the scene, clearly show that the club was totally destroyed by the blast.” Another explosion took place near Aleppo’s Chamber of Commerce.