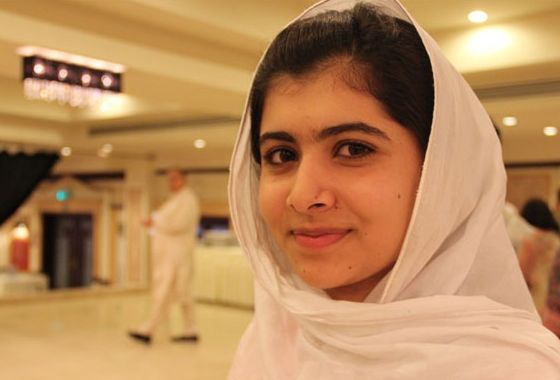 The Telegraph reports: A 14-year-old Pakistani girl who campaigned to promote education and expose extremist brutality has been shot in the head by gunmen from the Pakistani Taliban in a retaliatory attack.

Malala Yousafzai was on her way home from school in the former militant stronghold of Swat when two men opened fire, shooting her in the forehead and injuring two other girls.

Witnesses said a bearded man had asked for the girl by name before opening fire.

Her work earned her international recognition and numerous peace awards after she was revealed as the brave seventh grader who wrote an anonymous blog for the BBC’s Urdu service when the Taliban controlled Swat in 2009.

But it also brought death threats.

On Tuesday, a spokesman for the Pakistan Taliban claimed responsibility for the attack, accusing her of promoting Western, secular values.

“This was a new chapter of obscenity, and we have to finish this chapter,” he said. “We have carried out this attack.”

Reuters adds: Taliban spokesman Ehsanullah Ehsan said his group was behind the shooting.

“She was pro-West, she was speaking against Taliban and she was calling President Obama her ideal leader,” Ehsan said by telephone from an undisclosed location.

“She was young but she was promoting Western culture in Pashtun areas,” he said, referring to the main ethnic group in northwest Pakistan and southern and eastern Afghanistan. Most members of the Taliban come from conservative Pashtun tribes.

The Express Tribune reports: The Tehreek-i-Taliban Pakistan (TTP) which attacked National Award Peace winner Malala Yousafzai on Tuesday have said that they will target her again if she survives because she was a “secular-minded lady”.

A TTP spokesperson told The Express Tribune that this was a warning for all youngsters who were involved in similar activites and added that they will be targeted if they do not stop.

Adam Ellick at the New York Times interviewed Malala extensively in a 2009 documentary that was rebroadcast on Al Jazeera:

Ellick writes: The Malala I know transformed with age, from an obedient, rather shy girl 11-year-old into a publicly fearless teenager consumed with taking her activism to new heights. Her father’s personal crusade to restore female education seemed contagious. He is a poet, a school owner and an unflinching educational activist. Ziauddin is truly one of most inspiring and loving people I’ve ever met, and my heart aches for him today. He adores his two sons, but he often referred to Malala as something entirely special. When he sent the boys to bed, Malala was permitted to sit with us as we talked about life and politics deep into the night.

After the film was seen, Malala became even more emboldened. She hosted foreign diplomats in Swat, held press conferences on peace and education, and as a result, she won a host of peace awards. Her best work, however, was that she kept going to school.

In the documentary, and on the surface, Malala comes across as a steady and calming force, undeterred by anxiety or risk. She is mature beyond her years. She never displayed a mood swing, and never complained about my laborious and redundant interviews.

5 thoughts on “The shooting of Malala Yousafzai”