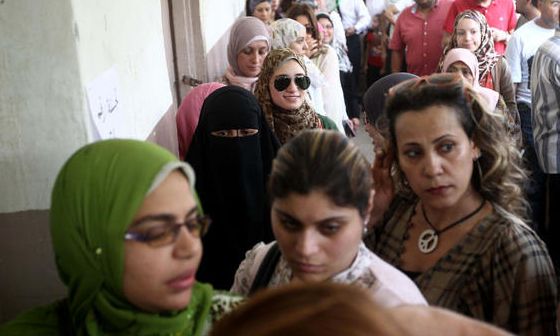 Millions of women voted in Egypt's first free presidential election but none were on the ballot.

At Aeon Magazine, Amal Ghandour writes: The face, a nod to her Egyptian mother, is pharaonic, curls freefalling all around it. The muscles packing her body betray countless hours of toil in the pool, on the bench press, on her feet — running. Her attire is as blunt in its skimpiness as Jordan, where she lives, is adamant in its conservatism. But while the look screams a fight easily won, her demeanor is tactful, her tenor even-keeled. This is a woman used to negotiating her way through life.

I will call her Hadaf, a common enough Arabic name, befitting a woman whose 34 years have been just that: hadaf, meaning singular purpose. At first glance, neither her impressive résumé nor her place in Jordanian society surprise. The milestones are all there: a BA in graphic design from Yarmouk University, up north in Irbid; a stint with a successful advertising agency, followed by a top executive job in a global company; and, just recently, an MBA from the London Business School. In Jordan, among the well-heeled, an education and a career with the tight skirts to match are not unusual.

Get to know Hadaf a little better, though, and you uncover a life that encapsulates the hard-going, incessant, yet finally successful struggles of Arab women to transform their unforgiving circumstances into a better set of odds.

Hadaf’s Palestinian father and Egyptian mother met in Egypt in the late 1960s. She was studying interior design, he agricultural engineering. Like thousands of Palestinians looking for a living, and indeed a home, he moved to Kuwait to teach. Hadaf’s mother soon followed, becoming a teacher herself so as to tiptoe neatly around her husband’s ego; interior design, they both knew, would have made them better money, but it would have made him feel less of a man.

When Saddam Hussein invaded Kuwait in 1990 and Yasser Arafat took his side, many Palestinians found themselves no longer welcome in the Gulf emirate, and so they moved to Jordan to try to reconstitute a decent life. Hadaf’s father was among them. Settling on the outskirts of the capital, he started up a spare-parts business, but it failed even before it had built up steam, plunging the entire family into near poverty.

There is no equivalent dramatic moment when Hadaf’s own battles began. No epiphanies that made her want to reach for something different. Her father’s tumble from middle-class status was not drastic. The neighbourhood was more ‘a social than an economic slum’ — very conservative and very comfortable with it. Her mother donned the veil when she hit 40, because that’s what women in her milieu do upon reaching the gateway to middle age. Her father stopped drinking alcohol but did not pray his way through the days. And there was love around — plenty of it. It’s just that Hadaf walked to the beat of a different drum.

‘Inch by inch. This is how I escaped marriage at 16 to a car mechanic; how I shortened the skirt and rolled up the sleeves a tiny bit; how I managed to go to Yarmouk; how I worked as a waitress there, and at the Hard Rock Café in Amman during the summers… I lobbied my mother, talked my father to death; had him visit the dorms, had him meet the owner of the restaurant up in Irbid, had him pick me up at 2am from the Hard Rock… But, you see, I was making a living. It was very difficult for them to argue with that.’

There were, of course, many fudges, omissions and fibs. ‘I did not tell my parents that I moved into my own apartment the second year of college [and] I escaped marriage to that mechanic by parading in a T-shirt in front of his shop. He was the one to break off the engagement. All I had to do then was persuade my father to let me finish high school.’

When Hadaf started to win the family’s bread, as it were, the parents went quiet. And they’ve been quiet ever since. Yet, even now, for their sake, Hadaf says, ‘I have two wardrobes at home: one for me, for my life; and one for them, when I go visiting.’

The Hadafs of the Arab world outnumber women like me, for whom life has been much gentler. But we don’t strain to reach out for each other across the divides. I did not have to go in search of her for insight. She lives everywhere around me. Hadaf populates the Middle East.

That said, hers is a distinctly upbeat story. Other women are fighting tooth and nail for much smaller breaks. They do win in the end — inch by inch — but the toll tends to draw age early on a young face, and the demands on grit and courage are almost always insufferably unkind.

A 22-year-old Palestinian – I’ll call her Suad – works with me on a region-wide community development initiative. She has just set aside her veil in conservative surroundings. She describes her own and her female friends’ lives in Beirut as an incessant search for opportunity amid a heap of constraints. ‘You worry about the consequences, and then you take a step, and then another one after that, and another one after that… You make use of every opening.’

This particular step, her unveiling, has proven to be especially charged. Suad took up the veil, a blend of shapes and colours in her case, at the age of 17, the last in her class to do so. Although most of her school friends were veiled, her parents’ leftist inclinations helped check the growing calls for Suad to amass herself into the fold. It was her teacher’s warning that finally tipped the scales. ‘She brought me before the entire class and told me that my mother would go to hell if I did not wear it. I succumbed.’

Suad took off her hijab two months ago, inspired by the rousing theme of nonconformity threading through her English literature courses. She felt she was being true to her identity.

Yet reactions to her move in a milieu that actively discourages feminine unorthodoxies are mixed. Suad’s father is happy to see her let her hair down and so, she thinks, would have been her mother, had she lived to witness this pointed return to visibility. So far, however, the neighbourhood has been worryingly quiet; and the backlash at work, especially among the men, upsetting. In the midst of widespread opprobrium, only one friend has said: ‘If that’s what you want, then do it.’ Suad shrugs. ‘Better this than hypocrisy.’

On their own, such triumphs as Suad’s and Hadaf’s stand as little more than heartening anecdotes on the margins of what is a crushingly discouraging situation for Arab women. One is tempted to ask: only this, after so many years of struggle? But pulled together and read differently, these small victories create a different norm of empowerment — one that, paradoxically, draws strength from the very subtlety and everyday nature of the ‘dissident’ acts themselves. [Continue reading…]