Matt Stoller writes: The big economic strategy for the next term of whoever is Presidenti is essentially, “turn those machines back on”. It’s fracking to replace cheap oil and a new real estate bubble in housing. Essentially, the idea is to turn America into more and more of a resource extraction economy, or a petro-state. If American politics seems more and more oligarchical, that’s because the American political system is beginning to reflect the Middle Eastern oil states its economic investment implies it should. Here are a series of charts explaining what is going on.

First, this is data showing investment in various investment sectors. 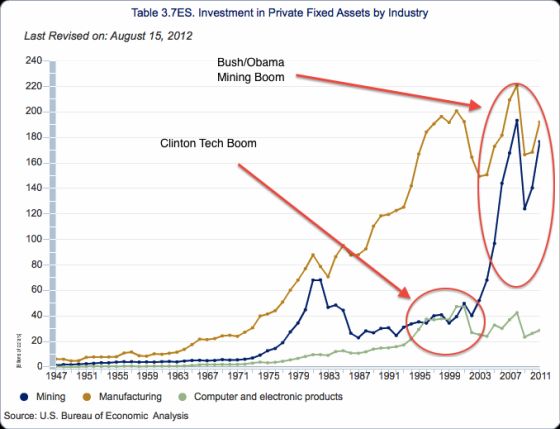 American politics looks increasingly like a petro-state, and this chart shows why. In the 1990s, particularly the late 1990s, the Clinton economy showed parity between manufacturing of computers/electronic products and mining (mostly oil and gas extraction). The Bush economy, starting in 2003 when the invasion of Iraq went sour, saw enormous hockey stick like investment in fracking, tar sands, and other types of extractive mining. Technology investment showed a slight decline. Obama by and large has sustained these trends. [Continue reading…]