The Libya Herald reports: Displaced refugees from Bani Walid have said that the military now controls the populated districts surrounding the town and are making frequent raids into the centre, using both light and heavy weapons.

The assertion comes amidst an ongoing exodus of civilians fleeing the fighting, with tens of thousands now believed to have left the hill-town. 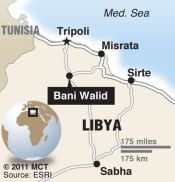 Relief workers from the International Committee of the Red Cross estimated yesterday that as many as 5,000 families, or some 25,000 people, had fled Bani Walid into the Urban area alone, with the total figure believed to be much higher.

The Bani Walid Crisis Management Centre has claimed that almost 10,000 families have fled in total. It is estimated that Bani Walid and its environs are home to around 80,000 people.

Refugees are fleeing the town in every direction, with thousands known to have headed to Tarhouna with more passing on to other towns including Tripoli.

Few if any native residents are taking the main roads out of the Bani Walid, preferring instead to take the hazardous desert tracks in attempt to evade security forces who have a list of some 1,000 names wanted for arrest.