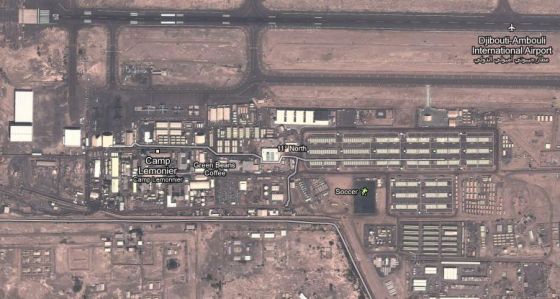 The Washington Post reports: Around the clock, about 16 times a day, drones take off or land at a U.S. military base here, the combat hub for the Obama administration’s counterterrorism wars in the Horn of Africa and the Middle East.

Some of the unmanned aircraft are bound for Somalia, the collapsed state whose border lies just 10 miles to the southeast. Most of the armed drones, however, veer north across the Gulf of Aden to Yemen, another unstable country where they are being used in an increasingly deadly war with an al-Qaeda franchise that has targeted the United States.

Camp Lemonnier, a sun-baked Third World outpost established by the French Foreign Legion, began as a temporary staging ground for U.S. Marines looking for a foothold in the region a decade ago. Over the past two years, the U.S. military has clandestinely transformed it into the busiest Predator drone base outside the Afghan war zone, a model for fighting a new generation of terrorist groups.

The Obama administration has gone to extraordinary lengths to conceal the legal and operational details of its targeted-killing program. Behind closed doors, painstaking debates precede each decision to place an individual in the cross hairs of the United States’ perpetual war against al-Qaeda and its allies.

Increasingly, the orders to find, track or kill those people are delivered to Camp Lemonnier. Virtually the entire 500-acre camp is dedicated to counterterrorism, making it the only installation of its kind in the Pentagon’s global network of bases.

Secrecy blankets most of the camp’s activities. The U.S. military rejected requests from The Washington Post to tour Lemonnier last month. Officials cited “operational security concerns,” although they have permitted journalists to visit in the past.

After a Post reporter showed up in Djibouti uninvited, the camp’s highest-ranking commander consented to an interview — on the condition that it take place away from the base, at Djibouti’s lone luxury hotel. The commander, Army Maj. Gen. Ralph O. Baker, answered some general queries but declined to comment on drone operations or missions related to Somalia or Yemen.

Despite the secrecy, thousands of pages of military records obtained by The Post — including construction blueprints, drone accident reports and internal planning memos — open a revealing window into Camp Lemonnier. None of the documents is classified and many were acquired via public-records requests.

1 thought on “Obama’s African base for drone warfare”