Matt Stoller argues in favor of voting for a third party candidate — even when this may result in Mitt Romney becoming president. His argument hinges on this claim:

The case against Obama is that the people themselves will be better citizens under a Romney administration, distrusting him and placing constraints on his behavior the way they won’t on Obama. As a candidate, Obama promised a whole slew of civil liberties protections, lying the whole time. Obama has successfully organized the left part of the Democratic Party into a force that had rhetorically opposed war and civil liberties violations, but now cheerleads a weakened America too frightened to put Osama bin Laden on trial. We must fight this thuggish political culture Bush popularized, and Obama solidified in place.

Stoller’s reasons for opposing Obama are cogent and persuasive, but whether a President Romney would have the mobilizing effect on the opposition that Stoller envisages is debatable.

Stoller writes: A few days ago, I participated in a debate with the legendary antiwar dissident Daniel Ellsberg on Huffington Post live on the merits of the Obama administration, and what progressives should do on Election Day. Ellsberg had written a blog post arguing that, though Obama deserves tremendous criticism, voters in swing states ought to vote for him, lest they operate as dupes for a far more malevolent Republican Party. This attitude is relatively pervasive among Democrats, and it deserves a genuine response. As the election is fast approaching, this piece is an attempt at laying out the progressive case for why one should not vote for Barack Obama for reelection, even if you are in a swing state.

There are many good arguments against Obama, even if the Republicans cannot seem to muster any. The civil liberties/antiwar case was made eloquently a few weeks ago by libertarian Conor Friedersdorf, who wrote a well-cited blog post on why he could not, in good conscience, vote for Obama. While his arguments have tremendous merit, there is an equally powerful case against Obama on the grounds of economic and social equity. That case needs to be made. For those who don’t know me, here is a brief, relevant background: I have a long history in Democratic and liberal politics. I have worked for several Democratic candidates and affiliated groups, I have personally raised millions of dollars for Democrats online, I was an early advisor to Actblue (which has processed over $300 million to Democratic candidates). I have worked in Congress (mostly on the Dodd-Frank financial reform package), and I was a producer at MSNBC. Furthermore, I aggressively opposed Nader-style challenges until 2008. 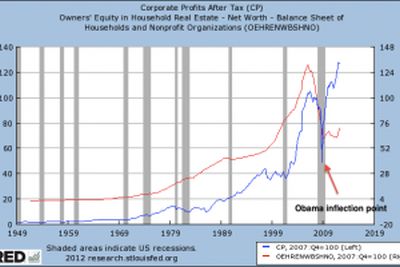 So why oppose Obama? Simply, it is the shape of the society Obama is crafting that I oppose, and I intend to hold him responsible, such as I can, for his actions in creating it. Many Democrats are disappointed in Obama. Some feel he’s a good president with a bad Congress. Some feel he’s a good man, trying to do the right thing, but not bold enough. Others think it’s just the system, that anyone would do what he did. I will get to each of these sentiments, and pragmatic questions around the election, but I think it’s important to be grounded in policy outcomes. Not, what did Obama try to do, in his heart of hearts? But what kind of America has he actually delivered? And the chart below answers the question. This chart reflects the progressive case against Obama.

The above is a chart of corporate profits against the main store of savings for most Americans who have savings — home equity. Notice that after the crisis, after the Obama inflection point, corporate profits recovered dramatically and surpassed previous highs, whereas home equity levels have remained static. That $5-7 trillion of lost savings did not come back, whereas financial assets and corporate profits did. Also notice that this is unprecedented in postwar history. Home equity levels and corporate profits have simply never diverged in this way; what was good for GM had always, until recently, been good, if not for America, for the balance sheet of homeowners. Obama’s policies severed this link, completely.

This split represents more than money. It represents a new kind of politics, one where Obama, and yes, he did this, officially enshrined rights for the elite in our constitutional order and removed rights from everyone else (see “The Housing Crash and the End of American Citizenship” in the Fordham Urban Law Journal for a more complete discussion of the problem). The bailouts and the associated Federal Reserve actions were not primarily shifts of funds to bankers; they were a guarantee that property rights for a certain class of creditors were immune from challenge or market forces. The foreclosure crisis, with its rampant criminality, predatory lending, and document forgeries, represents the flip side. Property rights for debtors simply increasingly exist solely at the pleasure of the powerful. The lack of prosecution of Wall Street executives, the ability of banks to borrow at 0 percent from the Federal Reserve while most of us face credit card rates of 15-30 percent, and the bailouts are all part of the re-creation of the American system of law around Obama’s oligarchy. [Continue reading…]