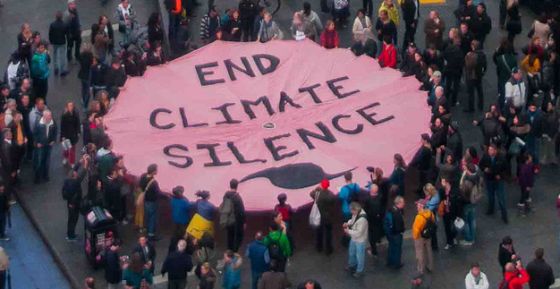 ‘I’m surprised it didn’t come up in one of the debates,’ said many Americans in response to the fact that President Obama and Mitt Romney didn’t have a single word to say about climate change.

But Obama claims he was surprised too — the quotation above actually comes from him.

Surprised that it got left out of the talking points he had to memorize?

84% of Democrats regard global warming as a serious issue and yet Obama didn’t use any of many easy opportunities to weave this into the debates, even though it has been discussed in every presidential debate for over three decades. Not only has climate change been largely left out of both Obama and Romney’s campaigns but each candidate has championed the accelerated development of fossil fuels.

In presidential politics, it’s not that the issue of climate change has failed to be advanced — it is not even being addressed as seriously as it was 24 years ago!

As David Roberts noted: The questioner doesn’t mamby-pamby around with he-said she-said, he states flatly that “most scientists” agree and that future generations are at risk.

And neither candidate bothers with dissembling or dodging. Both acknowledge the problem and promise to address it.

There’s lots being written these days about “climate silence.” There’s a grassroots protest underway. Coral Davenport has a piece on it at National Journal. Mike Grunwald touches on it at Time. Eugene Robinson has editorialized on it at The Washington Post. Tom Zeller Jr. has covered it, and so have ClimateWire and the L.A. Times. But by far the smartest take I’ve seen yet is from the only person in the cable news universe who takes this issue seriously, Chris Hayes:

Visit NBCNews.com for breaking news, world news, and news about the economy