Paul Hyacinthe Mben reports for Der Spiegel: Gao, a city of 100,000 people, has become a lifeless place since the Islamists took over. It was once a stopping point for tourists traveling to Timbuktu, but now the roadside stands have disappeared, bars and restaurants are boarded up and music is banned. The new strongmen proclaim their creed on signs posted at street corners, written in white Arabic lettering on a black background, that read: “There is no God but Allah, and Muhammad is his messenger.” 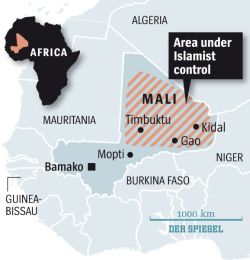 To make matters worse, garbage collection has been suspended, leaving waste to rot in the streets at temperatures of 40 degrees Celsius (104 degrees Fahrenheit). Around 400,000 people have already fled the Islamists. Most who have left represent the better-educated parts of the work force, like the engineers who kept the power plant and waterworks in operation. Foreign aid organizations are gone, as are government officials who were in the process of implementing a new road construction program.

“Gao is a dead city,” says Allassane Amadou Touré, a mechanic, as he drinks tea in the shade. He is unemployed, like many in the city, and says that Gao’s economic output has “declined by 85 percent” since the spring.

The Islamic police have become the city’s biggest employers. Ironically, their headquarters are on Washington Street in downtown Gao. From there, the armed police officers, most of them young men who are little more than children, are sent out into the neighborhoods to drum into residents what is considered “haram” and “halal,” or pure.

Until recently, the Sharia courts’ sentences were also carried out on Washington Street, but now the Islamic police have become more cautious. Since an angry crowd managed to rescue people who had been convicted of crimes from the executioner, hands and feet are now being severed in secret.

The Sharia court uses a former military base outside the city to carry out its grisly punishments. One of its victims is Alhassane Boncana Maiga, who was found guilty of stealing cattle. Four guards drag Maiga, wearing a white robe, into a dark room and tie him to a chair, leaving only one hand free. A doctor gives the victim an injection for the pain.

Then Omar Ben Saïd, the senior executioner, pulls a knife out of its sheath. “In the name of God, Most Gracious, Most Merciful,” he calls out, takes the convicted man’s hand and begins to slice into it, as blood squirts out. It becomes more difficult when Saïd reaches the bone, and it’s a full three minutes before the hand drops into a bucket. The executioner reaches for his mobile phone, calls his superior and says: “The man has been punished.”

Maiga had kept his eyes shut the entire time, not even screaming. The men lead him into another room, where his arm is bandaged, and after 15 minutes he is released and stumbles into the street. “I’m innocent,” he says. “What am I supposed to do now? I can’t work anymore.”

A few days later, Maiga is dead, probably as a result of blood loss or an infection. [Continue reading…]