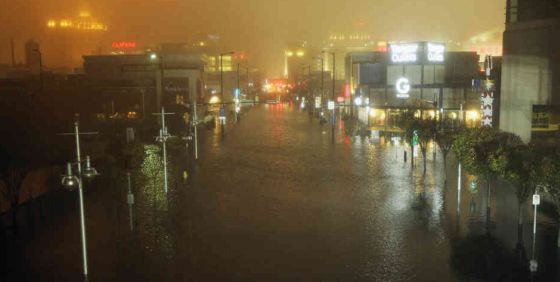 On Tuesday, as New Yorkers woke up to submerged neighborhoods and water-soaked electrical equipment, officials took their first tentative steps toward considering major infrastructure changes that could protect the city’s fragile shores and eight million residents from repeated disastrous damage.

Gov. Andrew M. Cuomo said the state should consider a levee system or storm surge barriers and face up to the inadequacy of the existing protections.

“The construction of this city did not anticipate these kinds of situations. We are only a few feet above sea level,” Mr. Cuomo said during a radio interview. “As soon as you breach the sides of Manhattan, you now have a whole infrastructure under the city that fills — the subway system, the foundations for buildings,” and the World Trade Center site.

The Cuomo administration plans talks with city and federal officials about how to proceed. The task could be daunting, given fiscal realities: storm surge barriers, the huge sea gates that some scientists say would be the best protection against floods, could cost as much as $10 billion.

But many experts say, given what happened with the latest storm, that inertia could be more expensive.

After rising roughly an inch per decade in the last century, coastal waters in New York are expected to climb as fast as six inches per decade, or two feet by midcentury, according to a city-appointed scientific panel. That much more water means the city’s flood risk zones could expand in size.

“Look, the city is extremely vulnerable to damaging storm surges just for its geography, and climate change is increasing that risk,” said Ben Strauss, director of the sea level rise program at the research group Climate Central in Princeton, N.J. “Three of the top 10 highest floods at the Battery since 1900 happened in the last two and a half years. If that’s not a wake-up call to take this seriously, I don’t know what is.” [Continue reading…]