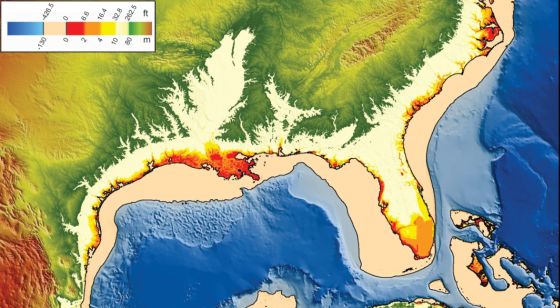 Deborah Byrd writes: The 2007 IPCC report projected a global sea level rise between 0.2 and 0.5 meters by the year 2100. But current measurements of sea level rise suggest Earth’s seas are rising at the maximum rate proposed by the IPCC – or faster. These measurements suggest a rise of one meter or more by the end of the century. That’s according to University of Colorado geologist Bill Hay, who presented his results yesterday (November 4, 2012) at a meeting of The Geological Society of America. Hay said:

Modern climate models … do not include the many feedbacks we are just discovering.

Arctic sea ice – which is already in the ocean – does not in itself raise sea level. But this melting plays a role in the overall warming of the Arctic, which leads to ice losses in nearby Greenland and northern Canada. In other words, when sea ice melts, it releases fresh water from the Arctic, which is then replaced by saltier, warmer water from the south. That warmer water pushes the Arctic toward more ice-free waters, which absorb sunlight rather than reflect it back into space like sea ice does. The more open water there is, the more heat is trapped in the Arctic waters, and the warmer things can get. So, according to Hay, melting Arctic sea ice is “a big heat pump that brings heat to the Arctic.” That feedback is not typically in climate models predicting sea level rise. [Continue reading…]