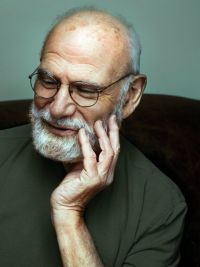 David Wallace-Wells writes: “To talk of diseases is a sort of Arabian Nights entertainment,” ran the epigraph to The Man Who Mistook His Wife for a Hat, Oliver Sacks’s fourth book and his first best seller—the one that made him famous, in 1985, as a Scheherazade of brain disorder. A sensitive bedside-manner neurologist, he had previously written three books, none of which had attracted much notice at all. The Man Who Mistook would mark the beginning of another career, and a much more public one, as perhaps the unlikeliest ambassador for brain science—a melancholic, savantlike physician disinterested in grand theories and transfixed by those neurological curiosities they failed to explain. Sacks was 52 years old and cripplingly withdrawn, a British alien living a lonely aquatic life on City Island, and for about ten years had been dealing with something like what he’d later call “the Lewis Thomas crisis,” after the physician and biologist who decided, in his fifties, to devote himself to writing essays and poetry.

“In those days, he was a complete recluse. I mean, there was nobody,” recalls Lawrence Weschler, a friend and essayist who once planned to write a biography of Sacks. “He was in a kind of rictus of shyness.” Sacks was struggling with writer’s block, wrestling with accusations of confabulation as well as the public’s general indifference to his first books, and would spend hours every day swimming in Long Island Sound, near the Throgs Neck Bridge, miles each way and often at night. “I feel I belong in the water — I feel we all belong in the water,” he’s said, and later echoed: “I cease to be a sort of obsessed intellect and a shaky body, and I just become a porpoise.”

W. H. Auden had become a friend, too, after he’d reviewed Sacks’s first book, the Victorian-ish survey Migraine, in 1971. Auden had also admired his second book, Awakenings, which detailed the miraculous recovery, then tragic relapse, of the near-catatonic patients given the experimental drug L-dopa. The book sold only modestly when published and attracted, he says, no medical reviews. Auden thought Sacks was capable of more. “You’re going to have to go beyond the clinical,” he told him. “Be metaphorical, be mythical, be whatever you need.”

The uncanny case studies of The Man Who Mistook were the mythic course that Sacks has followed ever since (his new book, Hallucinations, is another mesmerizing casebook of neurological marvles). Histories of such unfamiliar or forgotten disorders, tales of damage told in such picaresque and nondiagnostic ways, the stories of The Man Who Mistook struck early readers as landing oddly between science and fairy tale. (A man so unable to distinguish between objects he tried to lift his wife onto his head; a 49-year-old whose memory stalled at 19; a patient who thought Sacks was a delicatessen customer one minute and looked like Sigmund Freud the next.) “They come together at the intersection of fact and fable,” Sacks wrote in its grand preface. “But what facts! What fables! To what shall we compare them? We may not have any existing models, metaphors, or myths. Has the time perhaps come for new symbols, new myths?” [Continue reading…]