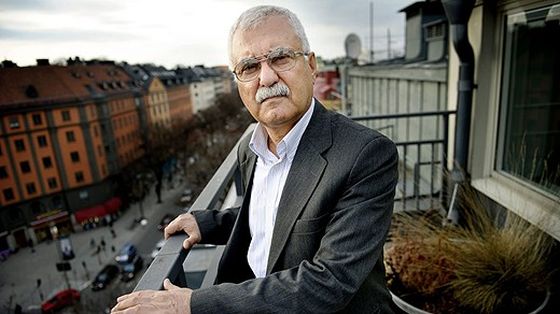 Sabra, a geography teacher who once wrote for the Arabic version of “Sesame Street,” immediately demanded that the international community provide arms to the rebels so that they can protect Syrian civilians from regime attack.

Western nations, he told reporters after the vote by the Syrian National Council, should “support our right to survival.” He added, “To protect ourselves, we need weapons.”

Tens of thousands of Syrians have died in the uprising, which began as peaceful demonstrations against the government of President Bashar Assad. But it has become a bloody civil war pitting the Syrian army and air force against rebels who despite a lack of heavy weapons have seized large swaths of Syrian countryside and have fought loyalist forces to a standstill in Aleppo, the country’s largest city.

Sabra seemed stunned by his sudden elevation to the council’s top post. “It is an unbelievable moment in my life,” he told reporters. “I promise to become a representative for all the Syrian people.”

It was uncertain whether Sabra’s selection would rehabilitate the Syrian National Council in the eyes of the United States. Last week, Secretary of State Hillary Clinton announced that the U.S. no longer would recognize the council as the primary anti-Assad organization, saying too many of its members had lived in exile for decades and that a new opposition group should include more representation from people fighting inside Syria.

Sabra may help fit that requirement. A longtime member of Syria’s communist party, which renamed itself the Syrian Democratic People’s Party in 2005, Sabra went into exile only in October after serving two months in prison for inciting dissent. Previously, he had served eight years in prison during the regime of Bashar Assad’s father, Hafez Assad.

Sabra credited his election to the intervention of a conservative Islamist from Homs, a Sunni Muslim city that has been the scene of brutal fighting between rebels and pro-Assad forces for most of this year.

Until the Islamist, Wasal al Shamali, who was here representing the Supreme Council for Revolutionary Commands, a collection of rebel-held cities in Syria, spoke on Sabra’s behalf, Sabra wasn’t even a member of the group’s top governing committee, the general secretariat. The Syrian National Council has been criticized because its 41-member secretariat includes no women or Alawites, the religious offshoot of Shiite Islam to which Assad belongs.

Shamali, however, said that Sabra should have his place on the general secretariat.

“I didn’t even know his name,” Sabra told McClatchy. “He was in tears.”

Added Sabra: “After that, who can talk about sectarianism when a Muslim sacrifices his place for a Christian?”

Sabra said his selection should signal to the international community: “Look at Syria. There is no sectarianism inside Syria. All the people here, Muslims, voted for Christians.”

He said the Syria that he and others are fighting for “doesn’t have minorities and majorities. We have citizenship. And as I am a citizen, my colleagues elected me.” [Continue reading…]