Michael Trimble writes: In 2008, at a zoo in Münster, Germany, a gorilla named Gana gave birth to a male infant, who died after three months. Photographs of Gana, looking stricken and inconsolable, were ubiquitous. “Heartbroken gorilla cradles her dead baby,” Britain’s Daily Mail declared. Crowds thronged the zoo to see the grieving mother.

Sad as the scene was, the humans, not Gana, were the only ones crying. The notion that animals can weep — apologies to Dumbo, Bambi and Wilbur — has no scientific basis. Years of observations by the primatologists Dian Fossey, who observed gorillas, and Jane Goodall, who worked with chimpanzees, could not prove that animals cry tears from emotion.

In his book “The Emotional Lives of Animals,” the only tears the biologist Marc Bekoff were certain of were his own. Jeffrey Moussaieff Masson and Susan McCarthy, the authors of “When Elephants Weep,” admit that “most elephant watchers have never seen them weep.” 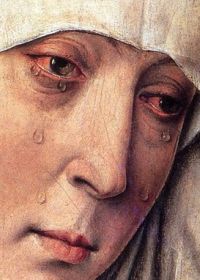 It’s true that many mammals shed tears, especially in response to pain. Tears protect the eye by keeping it moist, and they contain antimicrobial proteins. But crying as an embodiment of empathy is, I maintain, unique to humans and has played an essential role in human evolution and the development of human cultures.

Within two days an infant can imitate sad and happy faces. If a newborn mammal does not cry out (typically, in the first few weeks of life, without tears) it is unlikely to get the attention it needs to survive. Around three to four months, the relationship between the human infant and its environment takes on a more organized communicative role, and tearful crying begins to serve interpersonal purposes: the search for comfort and pacification. As we get older, crying becomes a tool of our social repertory: grief and joy, shame and pride, fear and manipulation.

Tears are as universal (but less culturally contingent) as laughter, and tragedy is more complex than joy — an insight Tolstoy and many others have offered. But although we all cry, we do so in different ways. [Continue reading…]