Reuters reports: President Mohamed Mursi condemned Israeli air strikes on the Gaza Strip as unacceptable aggression on Thursday and ordered Egypt’s prime minister to visit the besieged enclave in a show of support for the Palestinians. 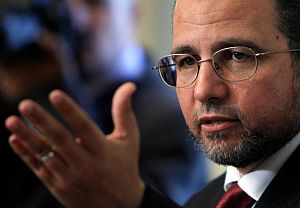 Facing his biggest test since becoming Egypt’s first popularly elected president this year, Mursi – whose roots are in the Muslim Brotherhood – has to balance the need to show solidarity with fellow Islamists running Gaza with the country’s dependence on about $2 billion a year in U.S. aid.

“We are in contact with the people of Gaza and with Palestinians and we stand by them until we stop the aggression,” Mursi said in a televised address. “The Israelis must realize that this aggression is unacceptable and would only lead to instability in the region.”

Egypt has already recalled its ambassador to Israel and appealed to the UN Security Council to end the fighting in which 16 Palestinians, five of them children, and three Israelis have been killed.

But sending a high-level delegation would raise the stakes – potentially forcing Israel to choose between suspending its shelling of Gaza or risking the lives of senior officials from a country with which it signed a peace treaty in 1979.