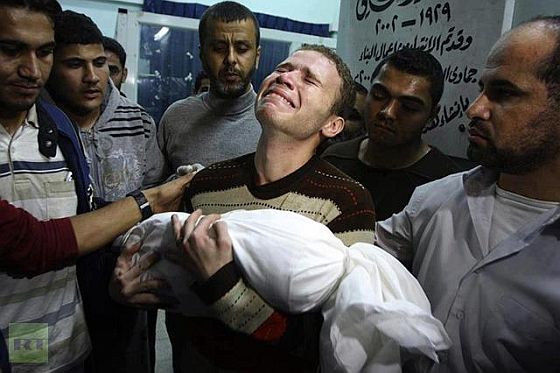 Max Fisher writes: The front page photo on Thursday’s Washington Post tells, in a single frame, a very personal story from Wednesday’s Israeli airstrikes on the Gaza Strip. Jihad Misharawi, a BBC Arabic journalist who lives in Gaza, carries the body of his 11-month old son, Omar, through al-Shifa hospital in Gaza City. 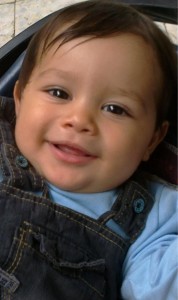 An Israeli round hit Misharawi’s four-room home in Gaza Wednesday, killing his son, according to BBC Middle East bureau chief Paul Danahar, who arrived in Gaza earlier Thursday. Misharawi’s sister-in-law was also killed, and his brother wounded. Misharawi told Danahar that, when the round landed, there was no fighting in his residential neighborhood.

“We’re all one team in Gaza,” Danahar told me, saying that Misharawi is a BBC video and photo editor. After spending a “few hours” with his grieving colleague, he wrote on Twitter, ”Questioned asked here is: if Israel can kill a man riding on a moving motorbike (as they did last month) how did Jihad’s son get killed.” [Continue reading…]

1 thought on “The story behind the photo: Journalist’s 11-month-old son killed in Gaza strikes”