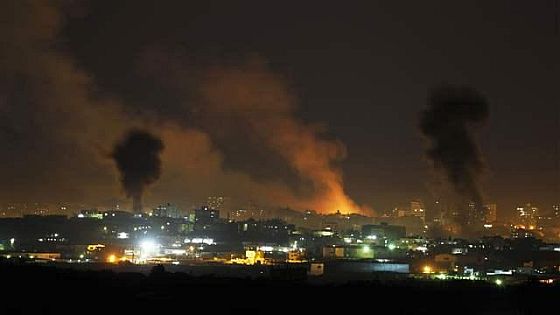 CNN reports: The major concern of the United States in the current Israeli-Hamas conflict is a potential Israeli ground incursion into Gaza, U.S. officials said Friday.

That would be a disastrous escalation that could trigger a larger conflict, a senior U.S. official told CNN.

“Escalation is what we are concerned about. We don’t want it to escalate to the point where Israel feels it has to take additional action, specifically ground force action,” the official said.

So, if Israel continues bombing and in response, rockets continue being fired from Gaza, President Obama will not be too concerned. He will no doubt periodically insist that Israel takes care to avoid killing civilians, but the line he has drawn is no ground troops. Kill the enemy without risking the lives of your own troops — this seems to be the Obama doctrine. It looks like Netanyahu might be quite happy to oblige with that particular external constraint.

Matthew Bell, Middle East Correspondent for the BBC, asked Amos Yadlin, who was head of Israel’s defense intelligence from 2005-2010, whether Israel will send ground troops into Gaza.

listen to ‘Will #Israel send ground troops into #Gaza? ’ on Audioboo

Ynet reports: In discussions held between Home Front Command Chief Major-General Eyal Eisenberg, regional commanders and heads of local authorities in the center and in the south, authorities have been instructed to prepare for a seven-week period of combat as part of Operation Pillar of Defense and to prepare emergency supplies, accordingly.