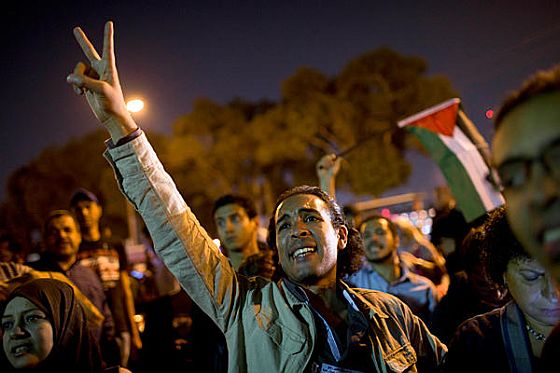 Egyptians in Cairo on Wednesday protesting against latest Israel airstrikes on Gaza.

Ahdaf Soueif writes: If you click here, you can listen to the Israeli attacks on Gaza. You can hear explosions, drones and ambulances. This is the soundtrack of the lives of Palestinians there now. They’re recording it and transmitting it, and their friends all over the world – particularly the Arab world – are listening to it live.

We are also reading the tweets and blogs the young Gazans are putting out, and taking a good look at the images they’re posting – like the one of Ranan Arafat, before and after. Before, she’s a pretty little girl with green eyes, a green halter-neck top and green ribbons in her hair. After the Israeli bomb, she’s a charred and shrunken figure. Her mouth is open. A medic lifts – for just a moment – her blue hospital shroud.

Since he won the presidency, Mohamed Morsi has tried to be a pragmatic politician. He pressed on with “security co-ordination” with Israel in Sinai; he started sealing up the tunnels that provide a lifeline to the besieged Gazans; he rejected the proposal of a free trade area on the borders between Egypt and Gaza; and he sent an ambassador to Tel Aviv with a fulsome letter to Shimon Peres. And so he found himself uncomfortably cosied up with remnants of the Mubarak regime and aficionados of the military government.

The rank and file of the Muslim Brotherhood and their Freedom and Justice party had a hard time justifying the actions of their man in the presidential palace to the rest of the country. Progressives and liberals mocked them for their big talk on Palestine all the years they were in opposition, and their resounding silence now they were in power. Skits about Morsi’s “love letter” to Peres appeared online and parodies on Cairo walls.

Now, the Israelis have pushed him – pushed him perhaps into a position where he’ll find himself more at ease in his presidency, and more in tune with the people. Large groups of young Egyptians have been heading for Gaza; my youngest niece is one of them. Like the efforts of the world’s civil society to send ships to Gaza, young Egyptian civilians with a passion for freedom are going to support their friends. [Continue reading…]