When it’s the season for Israelis to slaughter Palestinians, Barack Obama likes to go on vacation.

In 2009, as Israel rained down bombs and missiles on Gaza, the president-elect relaxed on the beaches and played golf in Hawaii. This time the Nobel Peace Prize winner has found time for rejuvenation in the tranquil ambiance of Mynamar’s Buddhist temples.

Whatever fears Israelis may have had about the president’s re-election have all been duly pacified. Indeed, his popularity in the Jewish state has probably never been higher.

Obama’s response to Operation Pillar of Defense has been impeccable, from an Israeli point of view: sympathetic, supportive and understanding. The right-wing Zionist Organization of America tried to salvage some remains from Obama’s alleged anti-Israel animus by complaining that he hadn’t “personally” condemned Hamas, but even that grievance lasted only 24 hours after Obama stated his position on-camera during the first leg of his tour of Asia.

If there’s been any “daylight” between Israel and the U.S., it has been only a small sliver. Obama has upheld Israel’s right to self-defense and has refrained from any outright criticism of the assault on Gaza, even after an entire 12 member Palestinian family was wiped out as a result of an erroneous air force attack. He has remained steadfast in his support for almost a week, surprising many of his right-wing critics and dismaying some of his supporters on the left.

True, Obama has been urging Prime Minister Benjamin Netanyahu to refrain from a ground assault, but most Israelis, including Netanyahu himself, share Obama’s apprehension that such a development would inflict much heavy casualties on both sides, inflame the volatile Arab world and possibly expand the conflict to other arenas. In this regard, Obama was simply preaching to the converted.

More importantly, Obama is also the beneficiary of Israel’s starry-eyed love affair with its Iron Dome anti-missile system, which has enjoyed spectacular success in protecting Israeli citizens from Hamas missiles. The ingenious Israeli development, which could potentially change the ground rules of modern warfare, was bankrolled by the Obama Administration to the tune of $274 million, with over $600 million pledged for the next three years.

Obama has expressed his commitment to Israel’s security with such insistence it appears to be a priority of no less importance than his duty to uphold the U.S. Constitution. Likewise, the idea that Israel’s security serves American interests is viewed within Washington’s establishment as an axiomatic truth and a pillar of global peace. Like many religious beliefs it is held unquestioned in the absence of any supporting evidence. In the six decades of its existence, Israel’s security has grown inexorably yet from its inception this has remained a state in near-perpetual war.

For decades, the ideas put forward by Ze’ev Jabotinsky in his 1923 essay “The Iron Wall” have shaped the way that many Israelis have approached their relationship with the Palestinians. Jabotinsky, the ideological forefather of Benjamin Netanyahu’s governing Likud party, believed that it was naïve to think that the native Arabs would ever accept what he identified as “Zionist colonization.” Thus, he concluded, the only way that the Zionist project could succeed was through the use of force—“an iron wall which the native population cannot break through.”

What has transpired in Gaza over the past several days, and what has transpired in Palestine over the last century, has proven Jabotinsky and his modern day protégés both right and wrong. They are right to believe that the native Palestinian Arabs will not give up their right to the land or to full equality; they are not simply going to go away. But they are wrong to believe that this challenge can be solved by force.

Over the course of a twenty-three-day campaign four years ago, Israel embarked on operation “Cast Lead” to end projectile fire from Gaza. Then, fourteen hundred Palestinians were killed and thousands more were wounded, most of them civilians. Gaza was devastated, and Hamas was temporarily weakened, as its leadership was aggressively targeted for assassination. (Thirteen Israelis died, too.) Yet the resistance was not broken; this time, projectiles reached Tel Aviv.

What is most disturbing is the way that the Israeli leadership has taken to seeing this not as a failure, but as a lifestyle. In Israel, they talk of “mowing the lawn” in Gaza, a callous idiom used to refer to the periodic bombardment of a besieged territory in the hopes of reducing the capacity of militant groups every few years. Each time they “mow,” however, they sow seeds of hatred for the next generation. How successful, morally or militarily, is a war whose repetition is planned?

If success is measured by the ability to prevent future wars, then Israel’s wars have clearly all been failures.

But where is the evidence that Israel has ever believed it could exist in peace? On the contrary, if wars might have once seemed to be a regrettable necessity for a nation that sees itself existing in a sea of enmity, war-making has indeed become part of the Israeli lifestyle. And thanks to America’s commitment to Israel’s security, this lifestyle is one which involves ever diminishing risks.

As the Instagram pictures circulating among young Israeli soldiers attest, the prospect of heading to Gaza provokes more glee than fear — and with good reason. During Operation Cast Lead in which 1,400 Palestinians lost their lives, after 20,000 Israeli soldiers entered Gaza just six were killed by enemy fire. 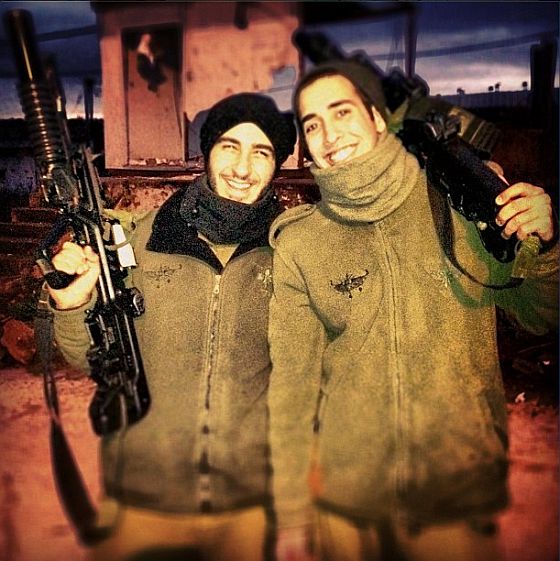 'We're coming for you gaza!'

For the world’s most militarized nation, the strength and invulnerability that has derived in large part from the unfettered supply of U.S. aid and U.S. commitment to ensuring Israel’s Qualitative Military Edge has provided the physical buttress to a religious conviction: that Israel is protected by God.

Ariel Siegelman, the Israeli-American soldier who features in the video above, writes:

After the Second Lebanon War, we learned some very valuable lessons. We learned that we had been living in an imaginary world and that the most dangerous type of war is the one that you call peace. We learned that we are not in fact in a ‘peace process’ at all. We are at war.

Today the question is still asked, ‘But how do we WIN?’ And that is another question coming directly from a Western mindset. There is no such thing as winning in this new kind of war. The war is ongoing, with periods of more violence and periods of less violence, during which the enemy regroups and plans his next attack. When we feel the enemy is getting strong, we must be prepared to make preemptive strikes, hard and fast at key targets, with viciousness, as the enemy would do to us. Only then can we acquire, not peace, but sustained periods of relative calm.

The lesson from Operation Cast Lead has been that Israel has no need to destroy Hamas or even prevent rocket fire from Gaza. All it needs is sustained American support — support which Obama duly provided without hesitation upon the launch of Operation Pillar of Cloud — and once every few years a new generation of Israelis can go through a rite of passage in which they are anointed as the newest members of the state’s warrior caste. Such rites of passage will remain popular among the participants and the Israeli public at large so long as Israel’s military continues to improve its ability to inflict pain without sustaining pain. Thus, while Israelis overwhelmingly support the current assault on Gaza only a minority favor sending troops in on the ground.

What American commitment to Israel’s security has done is not to protect a vulnerable state in a dangerous neighborhood, but rather to empower a sense of divinely ordained invulnerability: the sense that Israel can strike its enemies with impunity.

The successful testing of its defensive shields, rather than merely ensuring that Israelis can live without fear of attack, will inevitably lower the threshold for Israel’s own acts of aggression. The safer Israel becomes, the greater the threat it poses to everyone else.

1 thought on “The safer Israel is, the more dangerous it becomes”