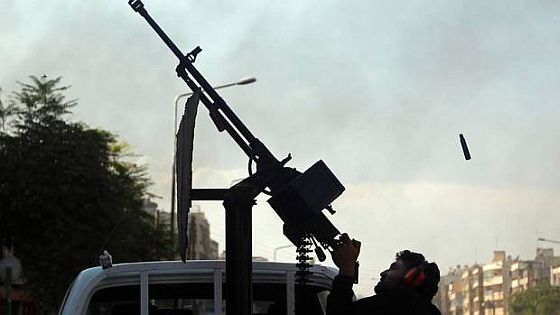 Christian Science Monitor reports: Syrian opposition fighters have long decried their lack of anti-aircraft weapons and called on the international community to arm them with something that can counter the the Syrian regime’s military’s jets and helicopters. Such support has yet to come – and there are few indicators that it will arrive anytime soon.

Still, those in the Free Syrian Army fighting for control of Aleppo province say that they’re making some progress in the battle for the skies. Using truck-mounted, DShK heavy machine guns, more commonly referred to as dushkas, FSA fighters say that they’ve managed to establish anti-air defenses capable of challenging jets.

Dushkas are one of the more difficult weapons for FSA fighters to acquire and in almost all cases must be captured from the regime forces or brought over by defectors. The anti-air defense network has grown slowly over the last several months, but many now say it’s reached a point where it can effectively challenge airplanes and helicopters.

“We control 70 percent of the sky, because if you compare the situation now to two months ago there are a lot less airplanes,” says Khlief Abu Allah, a dushka gunner who worked in an anti-aircraft unit in the Syrian Army during his obligatory military service before the revolution started.

While airstrikes remain a major threat in Aleppo, residents and FSA fighters say there’s been a noticeable drop in the number of attacks in recent weeks. [Continue reading…]