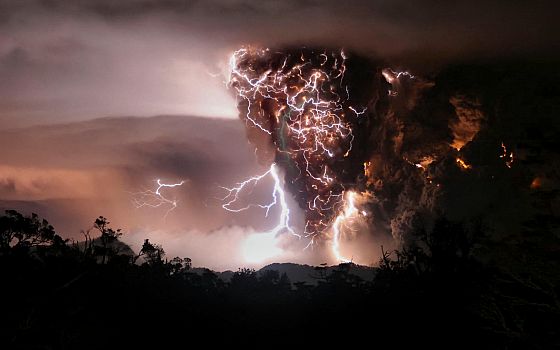 Charles C. Mann writes: About 75,000 years ago, a huge volcano exploded on the island of Sumatra. The biggest blast for several million years, the eruption created Lake Toba, the world’s biggest crater lake, and ejected the equivalent of as much as 3,000 cubic kilometers of rock, enough to cover the District of Columbia in a layer of magma and ash that would reach to the stratosphere. A gigantic plume spread west, enveloping southern Asia in tephra (rock, ash, and dust). Drifts in Pakistan and India reached as high as six meters. Smaller tephra beds blanketed the Middle East and East Africa. Great rafts of pumice filled the sea and drifted almost to Antarctica.

At about this time, many geneticists believe, Homo sapiens’ numbers shrank dramatically, perhaps to a few thousand people—the size of a big urban high school. The clearest evidence of this bottleneck is also its main legacy: humankind’s remarkable genetic uniformity. Countless people have viewed the differences between races as worth killing for, but compared to other primates—even compared to most other mammals—human beings are almost indistinguishable, genetically speaking. DNA is made from exceedingly long chains of “bases.” Typically, about one out of every 2,000 of these “bases” differs between one person and the next. The equivalent figure from two E. coli (human gut bacteria) might be about one out of twenty. The bacteria in our intestines, that is, have a hundredfold more innate variability than their hosts—evidence, researchers say, that our species is descended from a small group of founders.

Uniformity is hardly the only effect of a bottleneck. When a species shrinks in number, mutations can spread through the entire population with astonishing rapidity. Or genetic variants that may have already been in existence—arrays of genes that confer better planning skills, for example—can suddenly become more common, effectively reshaping the species within a few generations as once-unusual traits become widespread.

Did Toba, as theorists like Richard Dawkins have argued, cause an evolutionary bottleneck that set off the creation of behaviorally modern people, perhaps by helping previously rare genes—Neanderthal DNA or an opportune mutation—spread through our species? Or did the volcanic blast simply clear away other human species that had previously blocked H. sapiens’ expansion? Or was the volcano irrelevant to the deeper story of human change?

For now, the answers are the subject of careful back-and-forth in refereed journals and heated argument in faculty lounges. All that is clear is that about the time of Toba, new, behaviorally modern people charged so fast into the tephra that human footprints appeared in Australia within as few as 10,000 years, perhaps within 4,000 or 5,000. Stay-at-home Homo sapiens 1.0, a wallflower that would never have interested Lynn Margulis, had been replaced by aggressively expansive Homo sapiens 2.0. Something happened, for better and worse, and we were born.

One way to illustrate what this upgrade looked like is to consider Solenopsis invicta, the red imported fire ant. Geneticists believe that S. invicta originated in northern Argentina, an area with many rivers and frequent floods. The floods wipe out ant nests. Over the millennia, these small, furiously active creatures have acquired the ability to respond to rising water by coalescing into huge, floating, pullulating balls—workers on the outside, queen in the center—that drift to the edge of the flood. Once the waters recede, colonies swarm back into previously flooded land so rapidly that S. invicta actually can use the devastation to increase its range.

In the 1930s, Solenopsis invicta was transported to the United States, probably in ship ballast, which often consists of haphazardly loaded soil and gravel. As a teenaged bug enthusiast, Edward O. Wilson, the famed biologist, spotted the first colonies in the port of Mobile, Alabama. He saw some very happy fire ants. From the ant’s point of view, it had been dumped into an empty, recently flooded expanse. S. invicta took off, never looking back.

The initial incursion watched by Wilson was likely just a few thousand individuals—a number small enough to suggest that random, bottleneck-style genetic change played a role in the species’ subsequent history in this country. In their Argentine birthplace, fire-ant colonies constantly fight each other, reducing their numbers and creating space for other types of ant. In the United States, by contrast, the species forms cooperative supercolonies, linked clusters of nests that can spread for hundreds of miles. Systematically exploiting the landscape, these supercolonies monopolize every useful resource, wiping out other ant species along the way—models of zeal and rapacity. Transformed by chance and opportunity, new-model S. invictus needed just a few decades to conquer most of the southern United States.

Homo sapiens did something similar in the wake of Toba. For hundreds of thousands of years, our species had been restricted to East Africa (and, possibly, a similar area in the south). Now, abruptly, new-model Homo sapiens were racing across the continents like so many imported fire ants. The difference between humans and fire ants is that fire ants specialize in disturbed habitats. Humans, too, specialize in disturbed habitats—but we do the disturbing. [Continue reading…]

While Mann’s long essay is duly cautious about the future because we do indeed have a great capacity to mess things up, he notes major strides in human progress — such as the widespread abolition of slavery in the nineteenth century — which he sees as an indication of our capacity for enlightened change.

I have a less sanguine view. On that specific point, the abolition of slavery, it’s worth noting that it coincided with the industrial revolution and the growth of capitalism. The more skills workers require, the less practical it becomes that they are enslaved, but this is a matter of expedience — not the liberation of human potential.

As fewer and fewer people are required to operate machines, the need to control their behavior has not diminished. The control of human hands has been supplanted by the control of human desires. The enduring fact remains: throughout the world, small groups of people exert enormous power in shaping the lives of the rest of humanity.

Because of this division, it is very hard for the controlling elite to grasp the idea that ultimately we face a common fate. There is too much historical evidence supporting the view that however much misery might prevail in the world, it will always be possible for those with sufficient resources to insulate themselves from every new peril. By the time it becomes inescapably evident that this cannot always be true, it will already be too late.

2 thoughts on “The fate of the species”