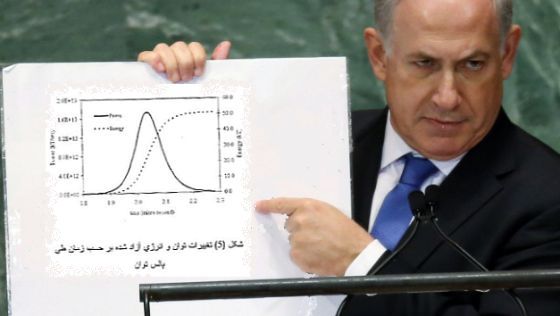 How long will it be before this dodgy graph is held up by familiar hands in front of the UN?

At the Bulletin of the Atomic Scientists, the nuclear physicists, Yousaf Butt and Ferenc Dalnoki-Veress, write: This week the Associated Press reported that unnamed officials “from a country critical of Iran’s nuclear program” leaked an illustration to demonstrate that “Iranian scientists have run computer simulations for a nuclear weapon that would produce more than triple the explosive force of the World War II bomb that destroyed Hiroshima.” The article stated that these officials provided the undated diagram “to bolster their arguments that Iran’s nuclear program must be halted.”

The graphic has not yet been authenticated; however, even if authentic, it would not qualify as proof of a nuclear weapons program. Besides the issue of authenticity, the diagram features quite a massive error, which is unlikely to have been made by research scientists working at a national level.

The image released to the Associated Press shows two curves: one that plots the energy versus time, and another that plots the power output versus time, presumably from a fission device. But these two curves do not correspond: If the energy curve is correct, then the peak power should be much lower — around 300 million ( 3×108) kt per second, instead of the currently stated 17 trillion (1.7 x1013) kt per second. As is, the diagram features a nearly million-fold error.

This diagram does nothing more than indicate either slipshod analysis or an amateurish hoax.

In any case, the level of scientific sophistication needed to produce such a graph corresponds to that typically found in graduate- or advanced undergraduate-level nuclear physics courses.

While such a graphic, if authentic, may be a concern, it is not a cause for alarm. And it certainly is not something proscribed by the Comprehensive Safeguards Agreement between the International Atomic Energy Agency and Iran, nor any other international agreements to which Iran is a party. No secrets are needed to produce the plot of the explosive force of a nuclear weapon — just straightforward nuclear physics.

Though the image does not imply that computer simulations were actually run, even if they were, this is the type of project a student could present in a nuclear-science course. [Continue reading…]

1 thought on “A dodgy nuclear graph”