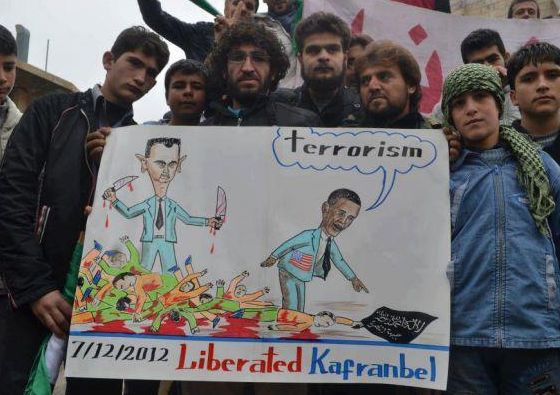 Aaron Y. Zelin writes: The backlash within Syria to the U.S. decision to designate the Syrian-based jihadist group Jabhat al-Nusra as a terrorist organization has been swift. Opposition to the designation, which was officially announced on Dec. 11, extends well beyond groups ideologically sympathetic to Jabhat al-Nusra’s radical goals. After more than 40,000 deaths, the starvation and torture of many, and the sadistic tactics of the Assad regime, Syrians now want the fall of the regime more than ever — even if that means temporarily embracing groups with suspect long-term goals.

The Barack Obama administration’s designation of Jabhat al-Nusra asserts that the group is an extension of al Qaeda in Iraq (AQI) — merely one of the terrorist organization’s aliases. Whether this is the case or whether the administration is issuing the designation as part of a political effort to convince the opposition to shun Jabhat al-Nusra, the move will likely fail to marginalize the group at this juncture. Following the fall of the regime, however, it could help sideline the most destructive influences trying to gain a foothold in post-Assad Syria.

The reaction among anti-Assad Syrians was perhaps best captured by an image that appeared on Facebook shortly after news of the planned designation broke last week. In the picture, residents of the northwestern town of Kafr Anbel hold up a poster showing Obama pointing accusingly toward a flag associated with Jabhat al-Nusra, saying “Terrorism.” Behind the U.S. president, however, is Syrian President Bashar al-Assad standing triumphant on a pile of murdered Syrian civilians.

The image reflects the reality that the Syrian opposition simply does not view Jabhat al-Nusra as the primary threat to the country — that designation still belongs to Assad’s murderous army. Nor is it lost on Syrians that the Obama administration has provided scant military assistance in their efforts to topple the regime — but is now singling out a rebel group that has become perhaps their revolution’s most effective fighting force. This is a view that seems to extend well beyond Jabhat al-Nusra’s ideological milieu: None of the individuals in the Kafr Anbel picture, for example, look like Islamists or Salafis. [Continue reading…]