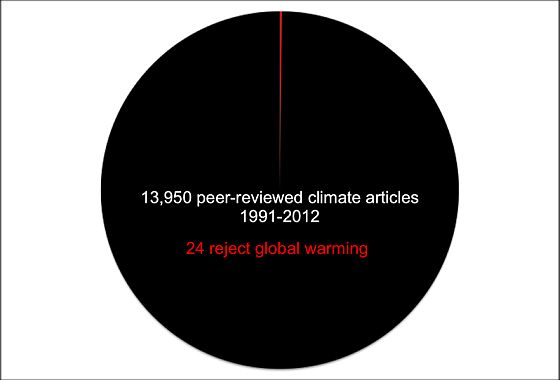 James Lawrence Powell writes: Polls show that many members of the public believe that scientists substantially disagree about human-caused global warming. The gold standard of science is the peer-reviewed literature. If there is disagreement among scientists, based not on opinion but on hard evidence, it will be found in the peer-reviewed literature.

I searched the Web of Science for peer-reviewed scientific articles published between 1 January 1991 and 9 November 2012 that have the keyword phrases “global warming” or “global climate change.” The search produced 13,950 articles. See methodology.

I read whatever combination of titles, abstracts, and entire articles was necessary to identify articles that “reject” human-caused global warming. To be classified as rejecting, an article had to clearly and explicitly state that the theory of global warming is false or, as happened in a few cases, that some other process better explains the observed warming. Articles that merely claimed to have found some discrepancy, some minor flaw, some reason for doubt, I did not classify as rejecting global warming. Articles about methods, paleoclimatology, mitigation, adaptation, and effects at least implicitly accept human-caused global warming and were usually obvious from the title alone. John Cook and Dana Nuccitelli also reviewed and assigned some of these articles; John provided invaluable technical expertise.

This work follows that of Oreskes (Science, 2005) who searched for articles published between 1993 and 2003 with the keyword phrase “global climate change.” She found 928, read the abstracts of each and classified them. None rejected human-caused global warming. Using her criteria and time-span, I get the same result. Deniers attacked Oreskes and her findings, but they have held up.

Some articles on global warming may use other keywords, for example, “climate change” without the “global” prefix. But there is no reason to think that the proportion rejecting global warming would be any higher.