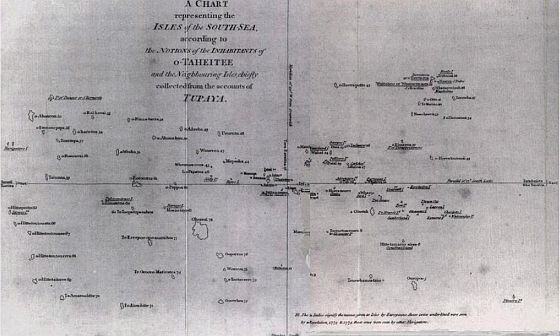 Map of the South Pacific made by the Polynesian navigator, Tupaia.

National Geographic: In the winter of 1769, the British explorer Captain James Cook, early into his first voyage across the Pacific, received from a Polynesian priest named Tupaia an astonishing gift — a map, the first that any European had ever encountered showing all the major islands of the South Pacific. Some accounts say Tupaia sketched the map on paper; others that he described it in words. What’s certain is that this map instantly gave Cook a far more complete picture of the South Pacific than any other European possessed. It showed every major island group in an area some 3,000 miles across, from the Marquesas west to Fiji. It matched what Cook had already seen, and showed much he hadn’t.

Cook had granted Tupaia a berth on the Endeavour in Tahiti. Soon after that, the Polynesian wowed the crew by navigating to an island unknown to Cook, some 300 miles south, without ever consulting compass, chart, clock, or sextant. In the weeks that followed, as he helped guide the Endeavour from one archipelago to another, Tupaia amazed the sailors by pointing on request, at any time, day or night, cloudy or clear, precisely toward Tahiti.

Cook, uniquely among European explorers, understood what Tupaia’s feats meant. The islanders scattered across the South Pacific were one people, who long ago, probably before Britain was Britain, had explored, settled, and mapped this vast ocean without any of the navigational tools that Cook found essential—and had carried the map solely in their heads ever since.

Two centuries later a global network of geneticists analyzing DNA bread-crumb trails of modern human migration would prove Cook right: Tupaia’s ancestors had colonized the Pacific 2,300 years before. Their improbable migration across the Pacific continued a long eastward march that had begun in Africa 70,000 to 50,000 years earlier. Cook’s journey, meanwhile, continued a westward movement started by his own ancestors, who had left Africa around the same time Tupaia’s ancestors had. In meeting each other, Cook and Tupaia closed the circle, completing a journey their forebears had begun together, so many millennia before. [Continue reading…]