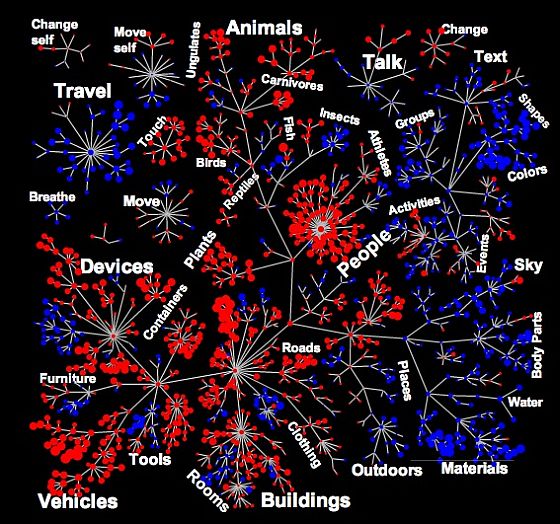 ExtremeTech: If not for our brains, our eyes wouldn’t be able to process anything. Considering how much time we spend with our eyes open, our brains are constantly dealing with an influx of visual data. The brain needs to store that data somewhere, and thanks to scientists over at the University of California, Berkeley, we now have our first map of not only where the brain puts all that information, but how our grey matter organizes it.

The study (PDF), led by neuroscience doctoral student Alexander Huth, had five participants watch two hours of movie trailers that contained over 1,700 categories of actions and objects. During that time, their brain activity was recorded using functional Magnetic Resonance Imaging (fMRI), measuring blood flow in various spots in the brain. Using linear regression, the scientists were then able to analyze the collected data, and subsequently build a model showing how all of those actions and objects fit into around 30,000 locations within the cortex.

After that point the researchers translated the model to a visual form. Using principal component analysis – a mathematical procedure used to provide a synopsis for a large amount of data — the scientists were able to visualize those 1,700 categories and how they related to one another, creating the chart shown to the right.