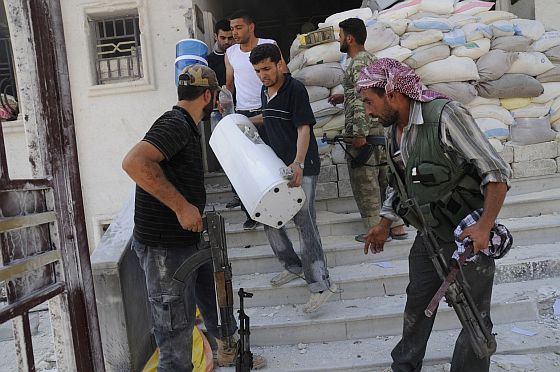 Ghaith Abdul-Ahad reports: It wasn’t the government that killed the Syrian rebel commander Abu Jameel. It was the fight for his loot. The motive for his murder lay in a great warehouse in Aleppo which his unit had captured a week before. The building had been full of rolled steel, which was seized by the fighters as spoils of war.

But squabbling developed over who would take the greater share of the loot and a feud developed between commanders. Threats and counter-threats ensued over the following days.

Abu Jameel survived one assassination attempt when his car was fired on. A few days later his enemies attacked again, and this time they were successful. His bullet-riddled body was found, handcuffed, in an alley in the town of al-Bab.

Captain Hussam, of the Aleppo military council, said: “If he had died fighting I would say it was fine, he was a rebel and a mujahid and this is what he had set out to do. But to be killed because of a feud over loot is a disaster for the revolution.

“It is extremely sad. There is not one government institution or warehouse left standing in Aleppo. Everything has been looted. Everything is gone.”

Captured government vehicles and weapons have been crucial to the rebels since the start of the conflict, but according to Hussam and other commanders, and fighters interviewed by the Guardian over a fortnight in northern Syria, a new phase has been reached in the war. Looting has become a way of life. [Continue reading…]