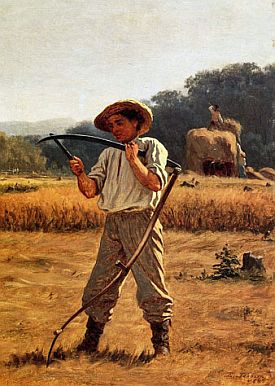 Paul Kingsnorth writes: Etymology can be interesting. Scythe, originally rendered sithe, is an Old English word, indicating that the tool has been in use in these islands for at least a thousand years. But archaeology pushes that date much further out; Roman scythes have been found with blades nearly two meters long. Basic, curved cutting tools for use on grass date back at least ten thousand years, to the dawn of agriculture and thus to the dawn of civilizations. Like the tool, the word, too, has older origins. The Proto-Indo-European root of scythe is the word sek, meaning to cut, or to divide. Sek is also the root word of sickle, saw, schism, sex, and science.

I’VE RECENTLY BEEN reading the collected writings of Theodore Kaczynski. I’m worried that it may change my life. Some books do that, from time to time, and this is beginning to shape up as one of them.

It’s not that Kaczynski, who is a fierce, uncompromising critic of the techno-industrial system, is saying anything I haven’t heard before. I’ve heard it all before, many times. By his own admission, his arguments are not new. But the clarity with which he makes them, and his refusal to obfuscate, are refreshing. I seem to be at a point in my life where I am open to hearing this again. I don’t know quite why.

Here are the four premises with which he begins the book:

Kaczynski’s prose is sparse, and his arguments logical and unsentimental, as you might expect from a former mathematics professor with a degree from Harvard. I have a tendency toward sentimentality around these issues, so I appreciate his discipline. I’m about a third of the way through the book at the moment, and the way that the four arguments are being filled out is worryingly convincing. Maybe it’s what scientists call “confirmation bias,” but I’m finding it hard to muster good counterarguments to any of them, even the last. I say “worryingly” because I do not want to end up agreeing with Kaczynski. There are two reasons for this.

Firstly, if I do end up agreeing with him — and with other such critics I have been exploring recently, such as Jacques Ellul and D. H. Lawrence and C. S. Lewis and Ivan Illich — I am going to have to change my life in quite profound ways. Not just in the ways I’ve already changed it (getting rid of my telly, not owning a credit card, avoiding smartphones and e-readers and sat-navs, growing at least some of my own food, learning practical skills, fleeing the city, etc.), but properly, deeply. I am still embedded, at least partly because I can’t work out where to jump, or what to land on, or whether you can ever get away by jumping, or simply because I’m frightened to close my eyes and walk over the edge.

I’m writing this on a laptop computer, by the way. It has a broadband connection and all sorts of fancy capabilities I have never tried or wanted to use. I mainly use it for typing. You might think this makes me a hypocrite, and you might be right, but there is a more interesting observation you could make. This, says Kaczynski, is where we all find ourselves, until and unless we choose to break out. In his own case, he explains, he had to go through a personal psychological collapse as a young man before he could escape what he saw as his chains. He explained this in a letter in 2003:

I knew what I wanted: To go and live in some wild place. But I didn’t know how to do so. . . . I did not know even one person who would have understood why I wanted to do such a thing. So, deep in my heart, I felt convinced that I would never be able to escape from civilization. Because I found modern life absolutely unacceptable, I grew increasingly hopeless until, at the age of 24, I arrived at a kind of crisis: I felt so miserable that I didn’t care whether I lived or died. But when I reached that point a sudden change took place: I realized that if I didn’t care whether I lived or died, then I didn’t need to fear the consequences of anything I might do. Therefore I could do anything I wanted. I was free!

At the beginning of the 1970s, Kaczynski moved to a small cabin in the woods of Montana where he worked to live a self-sufficient life, without electricity, hunting and fishing and growing his own food. He lived that way for twenty-five years, trying, initially at least, to escape from civilization. But it didn’t take him long to learn that such an escape, if it were ever possible, is not possible now. More cabins were built in his woods, roads were enlarged, loggers buzzed through his forests. More planes passed overhead every year. One day, in August 1983, Kaczynski set out hiking toward his favorite wild place:

The best place, to me, was the largest remnant of this plateau that dates from the Tertiary age. It’s kind of rolling country, not flat, and when you get to the edge of it you find these ravines that cut very steeply in to cliff-like drop-offs and there was even a waterfall there. . . . That summer there were too many people around my cabin so I decided I needed some peace. I went back to the plateau and when I got there I found they had put a road right through the middle of it. . . . You just can’t imagine how upset I was. It was from that point on I decided that, rather than trying to acquire further wilderness skills, I would work on getting back at the system. Revenge.

I can identify with pretty much every word of this, including, sometimes, the last one. This is the other reason that I do not want to end up being convinced by Kaczynski’s position. Ted Kaczynski was known to the FBI as the Unabomber during the seventeen years in which he sent parcel bombs from his shack to those he deemed responsible for the promotion of the technological society he despises. In those two decades he killed three people and injured twenty-four others. His targets lost eyes and fingers and sometimes their lives. He nearly brought down an airplane. Unlike many other critics of the technosphere, who are busy churning out books and doing the lecture circuit and updating their anarcho-primitivist websites, Kaczynski wasn’t just theorizing about being a revolutionary. He meant it.

BACK TO THE SCYTHE. It’s an ancient piece of technology; tried and tested, improved and honed, literally and metaphorically, over centuries. It’s what the green thinkers of the 1970s used to call an “appropriate technology” — a phrase that I would love to see resurrected — and what the unjustly neglected philosopher Ivan Illich called a “tool for conviviality.” Illich’s critique of technology, like Kaczynski’s, was really a critique of power. Advanced technologies, he explained, created dependency; they took tools and processes out of the hands of individuals and put them into the metaphorical hands of organizations. The result was often “modernized poverty,” in which human individuals became the equivalent of parts in a machine rather than the owners and users of a tool. In exchange for flashing lights and throbbing engines, they lost the things that should be most valuable to a human individual: Autonomy. Freedom. Control.

Illich’s critique did not, of course, just apply to technology. It applied more widely to social and economic life. A few years back I wrote a book called Real England, which was also about conviviality, as it turned out. In particular, it was about how human-scale, vernacular ways of life in my home country were disappearing, victims of the march of the machine. Small shops were crushed by supermarkets, family farms pushed out of business by the global agricultural market, ancient orchards rooted up for housing developments, pubs shut down by developers and state interference. What the book turned out to be about, again, was autonomy and control: about the need for people to be in control of their tools and places rather than to remain cogs in the machine.

Critics of that book called it nostalgic and conservative, as they do with all books like it. They confused a desire for human-scale autonomy, and for the independent character, quirkiness, mess, and creativity that usually results from it, with a desire to retreat to some imagined “golden age.” It’s a familiar criticism, and a lazy and boring one. Nowadays, when I’m faced with digs like this, I like to quote E. F. Schumacher, who replied to the accusation that he was a “crank” by saying, “A crank is a very elegant device. It’s small, it’s strong, it’s lightweight, energy efficient, and it makes revolutions.” [Continue reading…]

1 thought on “Searching for truth in a post-green world”