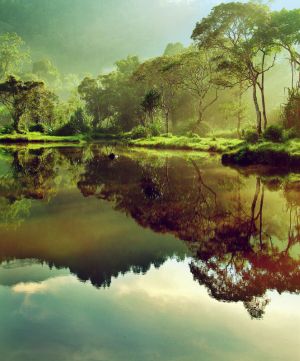 Maywa Montenegro and Terry Glavin write: This past January [2008], at the St. Innocent Russian Orthodox Cathedral in Anchorage, Alaska, friends and relatives gathered to bid their last farewell to Marie Smith Jones, a beloved matriarch of her community. At 89 years old, she was the last fluent speaker of the Eyak language. In May 2007 a cavalry of the Janjaweed — the notorious Sudanese militia responsible for the ongoing genocide of the indigenous people of Darfur — made its way across the border into neighboring Chad. They were hunting for 1.5 tons of confiscated ivory, worth nearly $1.5 million, locked in a storeroom in Zakouma National Park. Around the same time, a wave of mysterious frog disappearances that had been confounding herpetologists worldwide spread to the US Pacific Northwest. It was soon discovered that Batrachochytrium dendrobatidis, a deadly fungus native to southern Africa, had found its way via such routes as the overseas trade in frog’s legs to Central America, South America, Australia, and now the United States. One year later, food riots broke out across the island nation of Haiti, leaving at least five people dead; as food prices soared, similar violence erupted in Mexico, Bangladesh, Egypt, Cameroon, Ivory Coast, Senegal and Ethiopia.

All these seemingly disconnected events are the symptoms, you could say, of a global epidemic of sameness. It has no precise parameters, but wherever its shadow falls, it leaves the landscape monochromatic, monocultural, and homogeneous. Even before we’ve been able to take stock of the enormous diversity that today exists — from undescribed microbes to undocumented tongues — this epidemic carries away an entire human language every two weeks, destroys a domesticated food-crop variety every six hours, and kills off an entire species every few minutes. The fallout isn’t merely an assault to our aesthetic or even ethical values: As cultures and languages vanish, along with them go vast and ancient storehouses of accumulated knowledge. And as species disappear, along with them go not just valuable genetic resources, but critical links in complex ecological webs.

Experts have long recognized the perils of biological and cultural extinctions. But they’ve only just begun to see them as different facets of the same phenomenon, and to tease out the myriad ways in which social and natural systems interact. Catalyzed in part by the urgency that climate change has brought to all matters environmental, two progressive movements, incubating already for decades, have recently emerged into fuller view. Joining natural and social scientists from a wide range of disciplines and policy arenas, these initiatives are today working to connect the dots between ethnosphere and biosphere in a way that is rapidly leaving behind old unilateral approaches to conservation. Efforts to stanch extinctions of linguistic, cultural, and biological life have yielded a “biocultural” perspective that integrates the three. Efforts to understand the value of diversity in a complex systems framework have matured into a science of “resilience.” On parallel paths, though with different emphases, different lexicons, and only slightly overlapping clouds of experts, these emergent paradigms have created space for a fresh struggle with the tough questions: What kinds of diversity must we consider, and how do we measure them on local, regional, and global scales? Can diversity be buffered against the streamlining pressures of economic growth? How much diversity is enough? From a recent biocultural diversity symposium in New York City to the first ever global discussion of resilience in Stockholm, these burgeoning movements are joining biologist with anthropologist, scientist with storyteller, in building a new framework to describe how, why, and what to sustain.

The biological diversity crisis is often called the “Sixth Extinction” because an event of this magnitude has occurred only five times in the history of life on Earth. The last was at the end of the Cretaceous period, when the dinosaurs disappeared. In the past couple hundred years, humans have increased species extinction rates by as much as 10,000 times the background rates that have been typical over Earth’s history. This is a crash that, within the scientific community, is causing a slow panic and a wide belief that the dangers of biodiversity loss are woefully underestimated by most everyone outside of science. Yet even those who grasp extinction’s severity haven’t made much of a noticeable contribution to its containment. On May 16 the Zoological Society of London released a report suggesting that since contemporary environmentalism emerged with the declaration of the first Earth Day in 1970, close to one-third of all the wild species on Earth have disappeared. Language conservationists have fared no better: Of the world’s roughly 6,800 languages, fully half — though some experts say closer to 90 percent — are expected to disappear before the end of the century.

Our collective failure to recognize and impede this rampant winnowing of diversity can in part be blamed on the sheer rapidity with which it has advanced. Since only 1900, the human population has increased by a factor of four, water use by a factor of nine, carbon dioxide emissions by 17, marine-fish catch by 35, and industrial output by 40. It’s this expanding human footprint, and the global commerce on which it depends, that unifies the stories of Marie Smith Jones, the Janjaweed horsemen, the disappearing frogs, and the food riots. The transnational flow of people and products, media and information, crops and commodities has never in the history of the planet been so heavy or so fast. [Continue reading…]

1 thought on “In defense of difference”