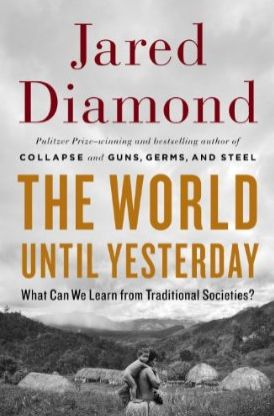 Jared Diamond: In Guns, Germs, and Steel, I set out to explain why, after the end of the last Ice Age, the most powerful and technologically advanced societies developed first in the Fertile Crescent and spread from there to Europe and North America. In Collapse, I asked why many societies disintegrated or vanished while others avoided that fate, and what lessons those varying outcomes hold for us today.

Since publication of Collapse, I have been attempting to understand the revolutionary changes in human societies and social relations brought about by the emergence of state government, after seven million years of simpler forms of organization. The differences are so profound, and we take state government as so completely natural, that I couldn’t even pose the differences as questions until I had experienced them first-hand through living in New Guinea, a window on our past.

I first went to New Guinea 41 years ago to study birds and to have adventures. I knew intellectually that New Guineans constituted most of the world’s last remaining “primitive” peoples, who until a few decades ago still used stone tools, little clothing, and no writing. That was what the whole world used to be like until 7,000 years ago, a mere blink of an eye in the history of the human species. Only in a couple of other parts of the world besides New Guinea did our original long-prevailing “primitive” ways survive into the 20th century.

Stone tools, little clothing, and no writing proved to be only the least of the differences between our past and our present. There were other differences that I noticed within my first year in New Guinea: murderous hostility towards any stranger, marriageable young people having no role in choosing their spouse, lack of awareness of the existence of an outside world, and routine multi-lingualism from childhood.

But there were also more profound features, which took me a long time even to notice, because they are so at odds with modem experience that neither New Guineans nor I could even articulate them. Each of us took some aspects of our lifestyle for granted and couldn’t conceive of an alternative. Those other New Guinea features included the non-existence of “friendship” (associating with someone just because you like them), a much greater awareness of rare hazards, war as an omnipresent reality, morality in a world without judicial recourse, and a vital role of very old people.

I’ve encountered myself some features of our primitive lifestyle among Inuits, Amazonian Indians, and Aboriginal Australians. Others have described such features among Kalahari Bushmen, African Pygmies, Ainus, California Indians, and other peoples. Of course, all these peoples differ from each other. New Guinea’s 1,000 tribes themselves are diverse: they constitute 1,000 radically different experiments in constructing a human society. But they all share (or shared) some basic features that used to characterize all human societies until the rise of state societies with laws and government, beginning around 5,500 years ago in the Fertile Crescent and now established over the entire world.

I am once again treating a huge question about human societies, and in using methods of long-term comparative history. In this case I am placing much heavier weight on one area of the world, New Guinea. Yes, I include other parts of the world: I’ve already been gathering material on the Mongols, Cherokees, Zulus, and many others. But New Guinea will play a central role, as the standard of comparison. That’s as it should be, because New Guinea’s 1,000 languages make up one 6th of all surviving languages, and because New Guinea contained by far the largest number of people and tribes still living under pre-state conditions in modem times.

The other difference is that my studies of New Guinea are based much more heavily on my personal experiences and observations, and less on publications by others. Many of my experiences in New Guinea have been intense — a sudden encounter at night with a wild man, the prolonged agony of a nearly-fatal boat accident, one broken little stick in the forest warning us that nomads might be about to catch us as trespassers … Those stories carry a bigger message than mere exciting adventures that have shaped my outlook. They give us a first-hand picture of the human past as it has been for millions of years — a past that has almost vanished within our lifetimes, and that no one will ever be able to experience again.

I’ve gone from wrestling with difficult abstract questions about the structure of societies—about their rise from agricultural origins in Guns, Germs, and Steel, and about their decline or maintenance in Collapse. The abstractness of those questions forced me to work hard to put human faces on them. The New Guinea work is more passionate, personal, and from the heart.

In conversation with John Brockman at Edge, Diamond recounts some of the stories from his new book, The World Until Yesterday.