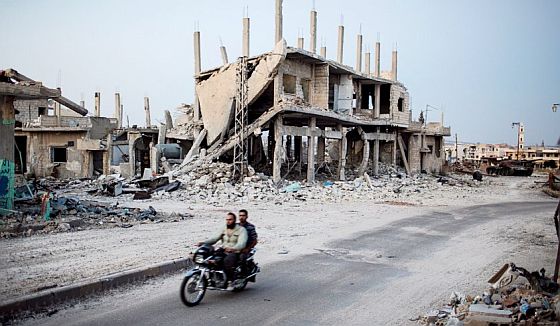 Christoph Reuter reports: Night falls quickly in Syria, as the overloaded pickup trucks carrying stray refugee families emerge through the mist. The headlight beams from our car fall over destroyed houses on our drive through olive groves and abandoned towns. Campfires can occasionally be seen in the distance.

We’ve driven along this road once before, in April 2012, which these days seems like an eternity ago. At the time, there was still electricity here, and people still lived in Taftanas, Sarmin, Kurin and other villages in Idlib Province, in northern Syria. But now, in December 2012, entire villages are empty and pockmarked with bullet holes, their residents having fled from airstrikes, hunger and frigid temperatures.

After a while, we reach a village where residents did not openly demonstrate against Syrian dictator Bashar Assad in the past. As a result, they still have electricity today. A man opens a door, shivering as he looks out at the damp, cold landscape. “Thank God for this weather!” he says wryly. It’s been raining for days, and everything seems immersed in fog and mud. But the fog is also a deterrent against aircraft and helicopters, sparing the area the usual bombardment for a few days and providing a moment of calm in the midst of the apocalypse.

Today, Syria is a devastated country. The cities have turned into battlefields, and in the places from which the Assad regime’s troops and militias were forced to withdraw, its air force is now incinerating the infrastructure.

Nevertheless, after months of static conflict between unequally matched forces, during which provinces were neither lost by the regime nor gained by the rebels, the balance has suddenly shifted. Military camps, airports and cities are falling to the rebels, while demoralized and hungry Syrian army units are simply giving up. The rebels are already on the eastern outskirts of Damascus, the capital. The army is defending its last bastions in the north and east, like islands in a sea, only able to receive supplies from the air. Even the Russian government, Assad’s most important ally next to Iran, is gradually abandoning the dictator. Before Christmas, Russian President Vladimir Putin said he wasn’t concerned with the fate of the Assad regime.

“We are tired,” says one of the rebels who have gathered in the village on this evening. The group includes a man charged with distributing bread, a few fighters and the owner of the only satellite telephone in the village. Everyone here has lost friends and relatives, in a country that is sinking all around them.

“The others, the soldiers, are also tired. But at least we know what we’re fighting for,” the rebel says. Even though they are sometimes worried about the future, about the days after victory when revenge will be taken, another adds: “Who can blame someone whose family was killed?”

But where would that leave a revolution that was intended to bring down the dictator, but not plunge the country into a civil war? The Assad regime will fall, but no one knows what will happen after that. [Continue reading…]