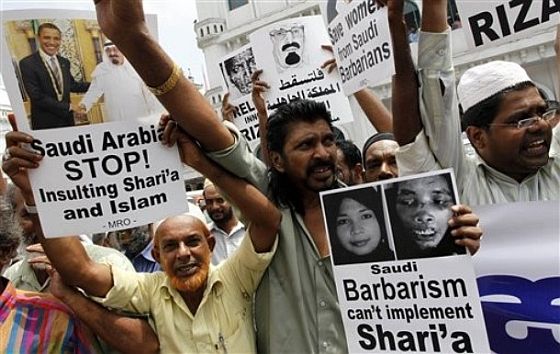 Basharat Peer writes: On Wednesday, the Saudi Arabian government beheaded Rizana Nafeek, a Sri Lankan woman who had worked as a maid in the kingdom, holding her responsible for the death of the four-month-old baby of her employer.

Nafeek — the daughter of an impoverished wood-cutter from a village in Trincomalee, in northern Sri Lanka — was a seventeen-year-old in the second week of her job as a maid in the Saudi town of Dawadmi when the child died in her care on May 22, 2005. She said that she had been bottle-feeding him when he choked. Her employer, Naif Al-Otaibi, accused her of strangling the child after an argument with his wife and took her to a local police station, where she was arrested.

Nafeek was tried in the Dawadmi High Court without legal representation. The main evidence against Nafeek was a “confession” she had signed in the police station. On June 16, 2007, the Dawadmi High Court sentenced her to death. After the news of her conviction spread, Fernando Basil, a Sri Lankan expatriate who runs the Hong Kong-based human-rights group Asian Human Rights Commission, hired a Saudi lawyer named Kateb Al Shammari and appealed Nafeek’s conviction.

To lift up her family from desperate poverty, Nafeek had dropped out of high school in Mutter village near Trincomalee in Sri Lanka and moved to Saudi Arabia to work as a maid. Men from domestic-worker recruiting agencies based in the Sri Lankan capital, Colombo, tour the countryside selling Saudi and Gulf dreams of prosperity to impoverished families. It is a process that is replicated in India, Pakistan, Bangladesh, and the Philippines, among other places. Nafeek’s family was convinced, but they faced a technical problem: she was a minor, seventeen years old, born on February 4, 1988. For a fee, the agent made her passport with a falsified date of birth, which listed her as a twenty three year old, born on February 2, 1982. And with that Nafeek became one of the twenty-five million migrant domestic workers in the Middle East, mostly from Asia and Africa.

Although their remittances lift their societies from stark poverty, a foreign maid steps into a world of abuse, overwork, and suspicion. Migrant workers enter Saudi Arabia and most other oil-rich Middle Eastern countries through a system known as kafala, or sponsorship. Kafala has happier roots; it is the Bedouin tradition of granting a stranger temporary refuge and feeding him as long as he wishes. In the modern Arab world, kafala has become an oppressive, non-transferable visa regime, which ensures that a foreign worker can only work for the kafeel, the employer who sponsored his/her visa. On a worker’s arrival, the kafeel generally confiscates his or her passport, and the worker is left with little protection. [Continue reading…]