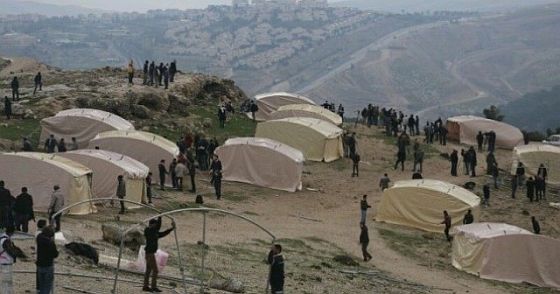 Adam Shatz writes: At 2.30 on Sunday morning, the Israeli army removed 250 Palestinians from Bab al-Shams, a village in the so-called E1 corridor: 13 square kilometres of undeveloped Palestinian land between East Jerusalem and Ma’ale Adumim, an Israeli settlement in the West Bank with a population of 40,000. Israel has had designs on E1 for more than a decade: colonising it would realise the vision of a ‘Greater Jerusalem’, and eliminate the possibility of a contiguous Palestinian state with East Jerusalem as its capital. After the UN vote to recognise Palestine as a non-member observer state, Binyamin Netanyahu declared that Israel would build 4000 new settler homes in E1. The high court issued a six-day injunction against his order to ‘evacuate’ Bab al-Shams, but Netanyahu was in no mood to wait. Once the Palestinians had been driven out, the land was declared a closed ‘military zone’.

It was another bleak day in the story of Palestinians trying to hold onto their land in the face of Israeli expansionism. But it was also something else. Bab al-Shams was no ordinary village, but a tent encampment set up by Palestinian activists, a number of them veterans of the Popular Resistance Committees who have been organising weekly demonstrations against the ‘separation fence’ in the villages of Bil’in and Nil’in. Several journalists noted that the residents of Bab al-Shams used the same tactics as Israeli settlers: pitching their tents, laying claim to the land, establishing ‘facts on the ground’. But the differences were more significant than the resemblances. The pioneers of Bab al-Shams were Palestinians, not foreigners. When settlers establish wildcat outposts, they know that the authorities may chastise them for it but will nonetheless soon supply them with electricity and water, and even build roads and access routes on their behalf. The people of Bab al-Shams knew that an IDF demolition crew would appear in due course: less than three days, as it turned out.

Bab al-Shams took its name from Elias Khoury’s epic novel, published in 1998. In the book, Bab al-Shams (‘the gate of the sun’) is a secret cave where a Palestinian fighter, Yunis, and his wife, Nahilah, meet to make love. They turn it into ‘a house, a village, a country’. Nahilah calls it the only liberated part of Palestine. Khoury gave his blessing to the village of Bab al-Shams. ‘What these guys did in three days,’ he told me, ‘was they opened the Gate of the Sun and liberated a small part of Palestine.’ [Continue reading…]