Peter Beumont writes: For a man whose death in combat in the Malian city of Gao was announced last June, Mokhtar Belmokhtar – the Islamist militant allegedly behind the raid on the Ansema gas field in Algeria – has been surprisingly busy.

Since that raid – which saw the deaths of several foreign oil workers, including a Briton, and the kidnapping of 41 more – Belmokhtar has been described in journalistic shorthand as “al-Qaida”.

On Thursday, as it was reported that some 25 of those captives had escaped, the real motives behind Belmokhtar’s raid – and his relationships with other Islamist groups in the Sahel – began to emerge as far more complex than first reported.

The standard version of Belmokhtar’s career as an Islamist leader is easy to summarise. The man dubbed the Uncatchable, as well as Mr Marlboro for his involvement in cigarette smuggling, was born in Ghardaia, Algeria, in 1972, starting his jihadist activities early.

By his own account – given in an interview at a time he was trying to shore up his leadership credentials – Belmokhtar, also known as Khalid Abu al-Abbas, travelled aged 19 to Afghanistan, where he claimed he gained training and combat experience before returning to his homeland in 1992.

This launched him into a two-decade career of Islamic militancy, first as a member of Algeria’s Islamic Armed Group (GIA) in the country’s civil war, then as a joint founder of the Salafist Group for Preaching and Combat (GSPC), which started extending its attacks against security forces into countries of the arid Sahel, which forms the southern fringe of the Sahara.

That group evolved into al-Qaida in the Islamic Maghreb (AQIM), a group as much interested in the financial benefits of kidnapping and smuggling as building an Islamic caliphate.

Despite the claims that Belmokhtar’s latest actions were carried out on behalf of AQIM in response to the French military action in Mali, his real agenda is likely to be more complicated and opaque. [Continue reading…]

Click on the image below to view an interactive map of the Ain Amenas gas field attack: 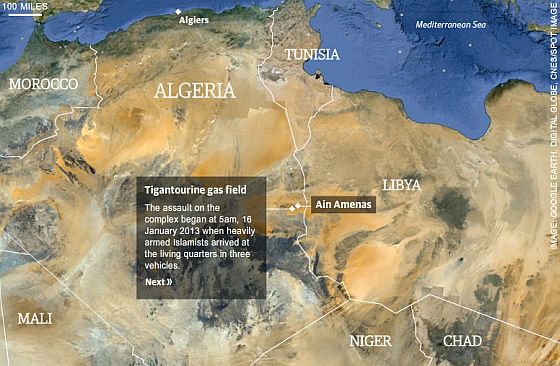