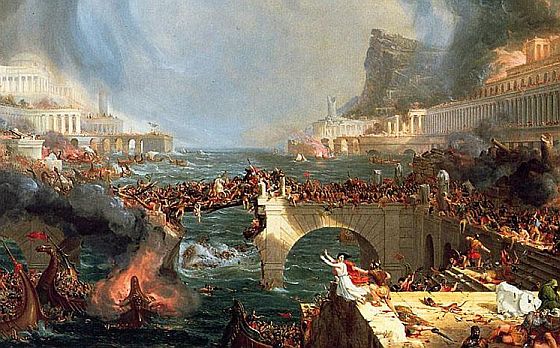 At the New York Times, Robert F Worth writes: As the uprising closed in around him, the Libyan dictator Col. Muammar el-Qaddafi warned that if he fell, chaos and holy war would overtake North Africa. “Bin Laden’s people would come to impose ransoms by land and sea,” he told reporters. “We will go back to the time of Redbeard, of pirates, of Ottomans imposing ransoms on boats.”

In recent days, that unhinged prophecy has acquired a grim new currency. In Mali, French paratroopers arrived this month to battle an advancing force of jihadi fighters who already control an area twice the size of Germany. In Algeria, a one-eyed Islamist bandit organized the brazen takeover of an international gas facility, taking hostages that included more than 40 Americans and Europeans.

Coming just four months after an American ambassador was killed by jihadists in Libya, those assaults have contributed to a sense that North Africa — long a dormant backwater for Al Qaeda — is turning into another zone of dangerous instability, much like Syria, site of an increasingly bloody civil war. The mayhem in this vast desert region has many roots, but it is also a sobering reminder that the euphoric toppling of dictators in Libya, Tunisia and Egypt has come at a price.

“It’s one of the darker sides of the Arab uprisings,” said Robert Malley, the Middle East and North Africa director at the International Crisis Group. “Their peaceful nature may have damaged Al Qaeda and its allies ideologically, but logistically, in terms of the new porousness of borders, the expansion of ungoverned areas, the proliferation of weapons, the disorganization of police and security services in all these countries — it’s been a real boon to jihadists.”

Last year, Malley wrote: The US cooperated with Gulf Arab monarchies and sheikhdoms in deposing Qaddafi yesterday and in opposing Assad today. It says it must be on the right side of history. Yet those regimes do not respect at home the rights they piously pursue abroad. Their purpose is neither democracy nor open societies. They are engaged in a struggle for regional domination. What, other than treasure, can proponents of a self-styled democratic uprising find in countries whose own system of governance is anathema to the democratic project they allegedly promote?

The new system of alliances hinges on too many false assumptions and masks too many deep incongruities. It is not healthy because it cannot be real. Something is wrong. Something is unnatural. It cannot end well.

This may indeed not end well but I question the idea that either the Arab Spring or NATO intervention in Libya should be viewed as the starting point.

I would go back to the Vietnam War. That was when American power suffered its first major blow. Less than a decade later, the Soviet Union had stepped into its own quagmire in Afghanistan leading to an even greater defeat and soon the end of the Cold War.

Though the U.S. claimed victory, there was no knockout punch — its opponent had staggered out of the ring leaving the American world champion to indulge in unipolar global power and the short-lived “end of history.”

History rebegan on 9/11, an attack perceived in much of the world and especially the Middle East, less as being emblematic of a diabolical threat from Islamic extremism and more as the United States receiving a well-deserved punch in the nose.

That a nation so powerful could so easily be brought to its knees by so few people was instructive, for this was the power that propped up so many of the Middle East’s authoritarian regimes and was the guarantor of the status quo.

9/11 did not just signal that a small band of terrorists were willing to go to extreme lengths in pursuit of an impossible goal; more importantly, it showed that American power was brittle and that those who depended on that power were similarly vulnerable.

America’s efforts to reestablish its power through wars in Iraq and Afghanistan had the opposite effect and confirmed that the era of seemingly invincible American power was over. This is what opened the doors to the Arab Spring.

Viewed most broadly, the emerging trend is one in which there is an ever widening arc of dwindling state power.

The stability of the West seems to derive mostly from its control of resources — it’s hard to claim that we enjoy the benefits of representative government.

Libertarians and survivalists might welcome or think they are prepared for the collapse of state power, but to those of us who regard climate change as the most urgent issue we must tackle, the idea that this can happen without the instruments of government and law seems like sheer fantasy.

Our failed states might never resemble those in Africa; lawlessness is less likely to appear in the guise of militias than through the expansion of the power of the deep transnational state — corporate interests whose sole guiding principle is the pursuit of profit.