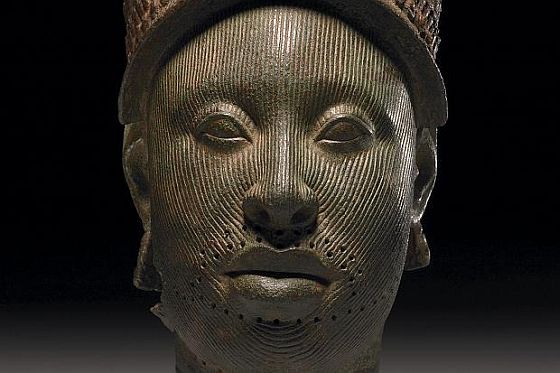 The Olokun Head discovered in Nigeria in 1910 and initially regarded by European scholars as too great a masterpiece to have originated from Africa.

One of the conceits of Western societies is that our museums and galleries and private collections represent our appreciation of culture. Indeed, our appreciation of culture is supposedly so refined that we have often asserted the right or even duty to become self-appointed custodians of artifacts whose protection demanded, we claimed, that they be removed from their place of origin.

It is reasonable to assume that in the coming months and years, artifacts from Timbuktu will find their way into the hands of art collectors who rationalize their actions with the idea that only individuals with the finest taste recognize the real value of such rare treasures.

What those who either buy such artifacts or merely view them while wandering around museums are inclined to believe is that culture and its material expressions are one and the same.

Even so, such objects only become artifacts as culture falls apart. Our museums serve less to preserve human genius and function more as cultural graveyards.

In cultures that no longer sustain oral tradition, we have forgotten that the written word was not intended to subordinate the value of the spoken word — it merely expands the voice’s reach. Language’s rhythmical structure serves first to allow thought to be housed in memory before being left to reside on the page.

Yes, it will be an immense loss if Timbuktu’s manuscript collections have been decimated, but there as elsewhere, the real cultural loss long preceded the effort to breath life into dead remains.

The culture most in jeopardy and most in need of protection lives in what Wade Davis calls the planet’s “ethnosphere”: the cultural web of life which is the “sum total of all thoughts and dreams, myths, ideas, inspirations, intuitions brought into being by the human imagination since the dawn of consciousness.”

This is culture which no museum can house and no collector can buy because it exists solely through its ability to animate human life.