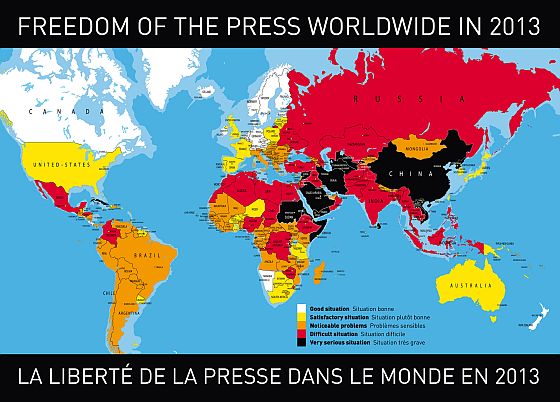 Reporters Without Borders: Last year’s index was marked by the Arab spring’s major news developments and the heavy price paid by those covering the protest movements. A range of scenarios has been seen in 2012, including countries such as Tunisia, Egypt and Libya, where regime change has taken place, countries such as Syria and Bahrain where uprisings and the resulting repression are still ongoing, and countries such as Morocco, Algeria, Oman, Jordan and Saudi Arabia, where the authorities have used promises and compromise to defuse calls for political and/or social and economic change.

Some of the new governments spawned by these protests movements have turned on the journalists and netizens who covered these movements’ demands and aspirations for more freedom. With legal voids, arbitrary appointments of state media chiefs, physical attacks, trials and a lack of transparency, Tunisia (138th, -4) and Egypt (158th, +8) have remained at a deplorable level in the index and have highlighted the stumbling blocks that Libya (131st, +23) should avoid in order to maintain its transition to a free press.

The deadliest country for journalists in 2012 was Syria (176th, 0), where journalists and netizens are the victims of an information war waged by both the Assad regime, which stops at nothing in order to crack down and impose a news blackout, and by opposition factions that are increasingly intolerant of dissent. In Bahrain (165th, +8) the repression let up slightly, while in Yemen (169th, +2) the prospects continue to be disturbing despite a change of government. Oman (141st, -24) fell sharply because of a wave of arrests of netizens.