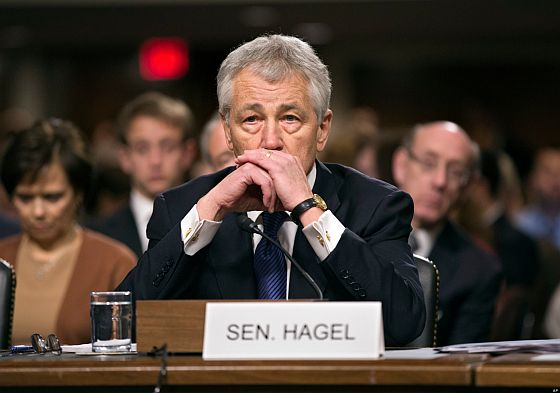 Michael Cohen writes: [W]hat made Hagel such an interesting secretary of defense candidate was that he was willing to make provocative statements about national security and the actual limits on US power. This week, we saw the neutered version of that candidate and it wasn’t pretty.

In defense of Hagel, though, it’s hard to imagine a sadder display of senatorial prerogatives than what the country witnessed in Thursday’s hearing. There were basically three categories of questions asked of Hagel:

• “Is Israel a great country, or is it the greatest? And if it’s the former, can you explain your lack of support for America’s most important ally?”

• “Why don’t you think Iran is crazy, unbalanced and a military competitor of the United States, as I do?”

• “Let me tell you more about the vital national security rule played by the weapons system or military base located in my home state.”

I’m not really exaggerating when I say these three themes accounted for practically 80% of the questions asked of Hagel, particularly by Republicans. In fact, according to a tweet from Washington Post reporter Rajiv Chandrasekaran that made the rounds yesterday evening, Israel was mentioned 136 times in the hearing and Iran 135 times:

Even though the defense secretary nominee said repeatedly that he supports Israel, that he considers Iran a state sponsor of terrorism and that he wouldn’t take military force off the table in dealing with its potential nuclear program, Republicans mined practically every statement ever made by Hagel (and often taken out of context) in an effort to assert that he doesn’t hold as uncompromising a position on these issues as they do.

The day reached its point of high comedy when Senator Lindsey Graham began interrogating Hagel on whether he believes – as he allegedly said several years ago – that the so-called “Jewish lobby” causes US senators to occasionally do dumb things that harm US foreign policy. Hagel hemmed and hawed on the question when, in an ideal world, he should have said, “Yes, and this hearing is example A.”

Senator Lindsey Graham: Name one person in your opinion who’s intimidated by the Israeli lobby in the United States Senate?
Chuck Hagel (if he felt at liberty to speak the truth): With all due respect, Senator Graham, I think you are? Why else would you be asking me this question?

8 thoughts on “How the Israel lobby’s toadies savaged Hagel”