C.J. Chivers offers a profile of Abdulkader al-Saleh, a k a Hajji Marea, leader of the military wing of Al Tawhid, the largest antigovernment fighting group operating in and near Aleppo.

At the core of a simplistic narrative about Syria that has been popularized in Western antiwar circles is the idea that a legitimate protest movement got hijacked by foreign jihadists operating as mercenaries for Gulf states. Those who still hold this view will presumably dismiss Chivers’ account as propaganda. However, for anyone who thinks that reporters like this are able to shed more light on events in Syria than do people like George Galloway or anyone else promoting the “good terrorist, bad terrorist” meme, this profile is worth reading. It represents a political arc that has been replicated all over Syria as protesters picked up arms and the common cause of toppling the Assad regime united individuals and groups covering a broad political spectrum.

An enduring preoccupation of many observers — whether they be policymakers inside Washington or the politically engaged with no institutional affiliations — is the need to peg Syrians into ideological or sectarian groupings. Syrians such as Saleh, however, seem to have little interest in political labels. What concerns them much more is Washington’s hypocrisy: that stern warnings are issued to Damascus about the use of chemical weapons being unacceptable, while Assad’s continuing slaughter of ordinary Syrians every day with conventional weapons receives little comment. 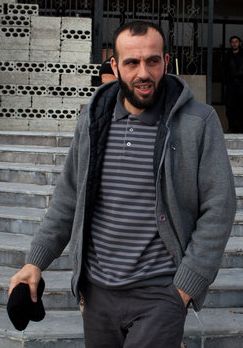 Men like Mr. Saleh present both a challenge and an opportunity for the West as it struggles to understand what is happening in Syria and to nurture networks that might provide stability and routes for Western influence should the government fall.

Mr. Saleh’s long-term intentions are not entirely clear. He says he is focused solely on winning the war, and promotes a tolerant pluralistic vision for the future. He is also openly aligned with Al Nusra Front, a growing Islamic militia that has been blacklisted by the United States, which accuses it of embracing terrorist tactics.

Officials in Washington are aware of Mr. Saleh, and other commanders of his standing. There is no evidence that they have connections with them, or a plan for how to develop relations in a Syria that is partly under their influence.

Mr. Saleh, wounded in battle multiple times, survived an assassination attempt in the fall, adding to his legend in the Aleppo governorate, where he is the rebels’ primary military commander.

“Was it $200,000?” he asked a peer, during a recent interview in a command post hidden in an Aleppo basement, about the bounty for his head. He seemed uninterested by the answer.

“Our concern now is only in the military side and how to fight this regime and finish this,” he said.

The son of a shopkeeper in Marea, just north of Aleppo, Mr. Saleh took an indirect route to guerrilla leader. As a young man, he served two and a half years as an army conscript, working, he said, in a chemical weapons unit.

He later joined the Dawa religious movement as a missionary. He traveled abroad, including, one of his brothers said, to Jordan, Turkey and Bangladesh, where he taught and studied Islam and invited people to hear the call to faith.

Life in Syria lured him back. His hometown lies in an agricultural belt, ringed by dark-soiled fields. Mr. Saleh opened a shop on one of Marea’s main streets, from where he imported and sold seeds. He married and started a family, which grew to include five children.

Not long after the uprising began, he joined with neighbors and relatives to organize demonstrations against what he described as the government’s repression.

When the fighting began, and rebels formed underground cells to plan ambushes, make bombs and persuade government soldiers to defect, Mr. Saleh’s standing grew. People spoke of a successful commander who was honest, organized and almost serenely calm under fire.

In many quarters his identity remained unknown. “We were secretive,” he said. “The public knew there was someone named Hajji Marea who led the demonstrations. But nobody knew who he was.”

Though he stands a little more than six feet tall, Mr. Saleh is unimposing, retaining an open face and youthful lankiness. Outsiders might not even make him for a fighter. One recent day, wearing a hoodie and moving with a loping gait, he could have passed for a graduate student.