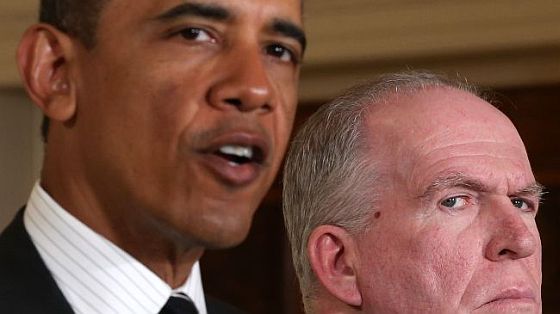 Micah Zenko writes: During his second inaugural address, President Obama offered two aspirational statements that struck many observers as incongruous with administration policies: “A decade of war is now ending” and “We, the people, still believe that enduring security and lasting peace do not require perpetual war.” We should question these observations, not least because of the string of U.S. government plans and activities that increasingly blur the conventional definition of war.

My own list of war-like activities since Obama’s inaugural would include: four drone strikes that killed 16 people (all in Yemen); the acknowledgement by Secretary of Defense Leon Panetta regarding drones, "We’ve done that in Pakistan. We’re doing it in Yemen and elsewhere. I think the reality is its going to be a continuing tool of national defense in the future"; the announcement that the U.S. military would provide intelligence, transportation, and refueling support for the French intervention in Mali; the signing of a U.S.-Niger status of forces agreement that will likely include a drone base for surveillance missions, although U.S. officials "have not ruled out conducting
missile strikes at some point"; the forthcoming expansion (perhaps quintupling) of U.S. Cyber Command, including "combat mission forces" for offensive cyberattacks; the executive branch’s secret legal review determining that Obama "has the broad power to order a pre-emptive strike if the United States detects credible evidence of a major digital attack looming from abroad"; the Marine commandant’s announcement of a new "crisis response unit" that would be "rapidly employable" to "address crises"; and the revelation that the United States is negotiating to purchase the Sheraton Hotel in Sanaa, the capital of Yemen, to house the growing number of embassy staff, troops, and contractors who implement U.S. security force assistance and counterterrorism operations in that country. (For other examples, see the interesting End of War Timeline that Jack Goldsmith and Lawfare created.)

Using lethal force against other countries — and developing and sustaining the capabilities to do so in perpetuity — are the distinguishing features of a country at war. As Vice Chairman of the Joint Chiefs of Staff Adm. James Winnefeld, Jr. remarked in November, "We remain a nation at war." In January, Gen. Martin Dempsey, chairman of the Joint Chiefs, told Ted Koppel that even after 2014, "Our war in Afghanistan will be complete, but no one has ever suggested that that will end the war." Last week, Secretary Panetta reminded policymakers and the press, as he often does: "We are in a war. We’re in a war on terrorism and we’ve been in that war since 9/11." Finally, during his grueling confirmation hearing to become the next secretary of defense, Chuck Hagel stated: "We’re at war in Afghanistan. We’re at war around the world….The fact is we’ve been at war for 12 years."

Most analysts and journalists have focused on President Obama’s expanded scope, intensity, and institutionalization of targeted killings against suspected terrorists and militants. However, perhaps the enduring legacy of the Obama administration will be its sustained, rigorous effort to shape and define-down the idea of war. [Continue reading…]

2 thoughts on “Obama: the president of perpetual war”