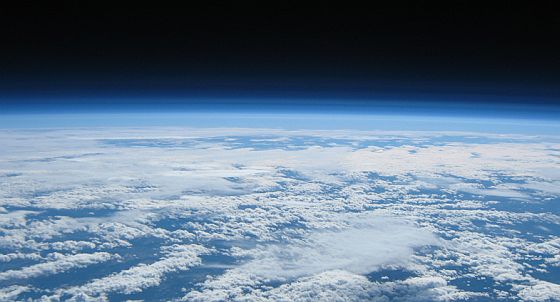 Climate change has resulted from unplanned geoengineering — for most of the last two centuries, we have been pumping vast quantities of greenhouse gases into the atmosphere without pausing to consider the results. So geoengineering that would involve seeding the upper atmosphere with solar-reflecting sulfate aerosols might look like a technological fix for a technological problem.

“Solar radiation management” (SRM) far from offering a solution to climate change, seems much more like another expression of the mindset that brought us to this perilous juncture.

MIT Technology Review: Critics of SRM — and even its advocates — note that the technology has numerous limitations, and that no one is entirely sure what the consequences would be. Sulfate aerosols reflect sunlight in the upper atmosphere, thus directly cooling the planet. But greenhouse gases operate very differently, trapping long-wave infrared radiation escaping from Earth’s surface and thus warming it. While sulfates would be likely to offset warming, it’s not clear exactly how they would counteract some of the other effects of greenhouse gases, particularly changes in precipitation patterns. And SRM would do nothing to reduce the acidification of the oceans caused by rising levels of carbon dioxide in the atmosphere.

“The term ‘solar radiation management’ is positively Orwellian,” says ­Raymond Pierre­humbert, a geophysicist at the University of Chicago. “It’s meant to give you a feeling that we really understand what we would be doing. It’s a way to increase comfort levels with this crazy idea. What we’re really talking about is hacking the planet in a case where we don’t really know what it is going to do.” In delivering the prestigious Tyndall Lecture at the annual American Geophysical Union meeting last December, he said the idea of putting sulfate aerosols in the stratosphere was “barking mad.”

Pierre­humbert also rejects the value of doing field experiments. “The whole idea of geoengineering is so crazy and would lead to such bad consequences, it really is pretty pointless. We already know enough about sulfate albedo engineering to know it would put the world in a really precarious state. Field experiments are really a dangerous step on the way to deployment, and I have a lot of doubts what would actually be learned.”

The fundamental problem with albedo engineering, says Pierrehumbert, is that once we start using it, we’ll need to continue indefinitely. Since it only offsets warming, once the process stops, temperature changes caused by greenhouse gases will manifest themselves suddenly and dramatically. “If you stop — or if you have to stop — then you’re toast,” he says. Even using it as a temporary Band-Aid doesn’t make sense, he argues: “Once you get to the point in terms of climate changes that you feel you have to use it, then you have to use [SRM] forever.” He believes that this makes the idea a “complete nonstarter.”

Besides, Pierrehumbert says, our climate models “are nowhere near advanced enough for us to begin thinking of actually engineering the planet.” In particular, computer models don’t accurately predict specific regional precipitation patterns. And, he says, it’s not possible to use existing models to know how geoengineering might affect, say, India’s monsoons or precipitation in such drought-prone areas as northern Africa. “Our ability to actually say what the regional climate patterns will be in a geoengineered world is very limited,” he says.

Alan Robock, meanwhile, has a long list of questions concerning SRM, at the top of which is: can it even be done? Robock, an expert on how volcanoes affect climate and a professor of environmental sciences at Rutgers University, cautions that while the Pinatubo eruption confirmed the cooling effect of sulfate aerosols, it injected a massive amount of sulfur dioxide into the stratosphere over a few days. Solar geoengineering would use far less sulfur but disperse it continuously over an extended period. That could be a critical difference. The optimal way to achieve SRM is with sulfur particles only about half a micrometer in diameter. Sunlight reflects off the surface of the particles, and smaller particles have more surface area than larger ones, making them far more efficient at blocking the sun. Robock worries that as sulfur is continuously injected and concentrations build up, the small particles will clump together into large ones, necessitating far more sulfur than some current proposals assume.

These details of aerosol chemistry could help determine the viability of SRM. “David [Keith] thinks it is going to be easy and cheap, and I don’t agree,” says Robock. He estimates that several million tons of sulfur would have to be injected into the atmosphere annually to offset doubled levels of carbon dioxide, but if the particles clump together, “it could be many times that.”

Research so far shows that producing a cloud in the stratosphere — Robock’s preferred description of SRM — “could cool the climate,” he says. “But you would have a very different planet, and other things could be worse.” He points out, for example, that in the aftermath of Mount Pinatubo, rainfall decreased significantly in some parts of the world. Robock supports more modeling on solar geoengineering, but “right now, I don’t see a path in which it would be used,” he says. “I don’t see how the benefits outweigh the negatives.”

2 thoughts on “Solar radiation management — a cheap, easy fix for climate change the could wreck the planet”