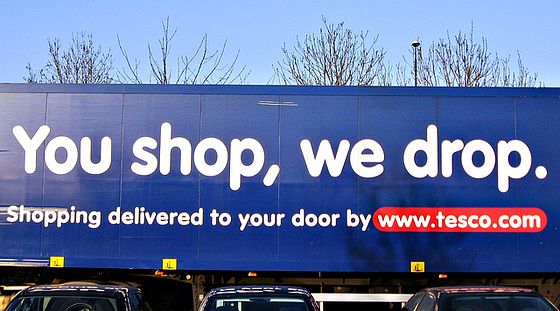 The Independent reports: Tesco workers are being made to wear electronic armbands that managers can use to grade how hard they are working. [British-based Tesco is the world’s second-largest retailer after Walmart.]

A former staff member has claimed employees are given marks based on how efficiently they work in a bid to improve productivity and can be called in front of management if they take unscheduled toilet breaks.

The armbands are worn by warehouse staff and forklift drivers, who use them to scan the stock they collect from supermarket distribution points and send it out for delivery. Tesco said the armbands are used to improve efficiency and save its staff from having to carry around pens and paper to keep track of deliveries. But the device is also being used to keep an eye on employees’ work rates, the ex-staff member said.

The former employee said the device provided an order to collect from the warehouse and a set amount of time to complete it. If workers met that target, they were awarded a 100 per cent score, but that would rise to 200 per cent if they worked twice as quickly. The score would fall if they did not meet the target.

If, however, workers did not log a break when they went to the toilet, the score would be “surprisingly lower”, according to the former staff member, who did not want to be named but worked in an Irish branch of Tesco. He said that some would be called before management if they were not deemed to be working hard enough. “The guys who made the scores were sweating buckets and throwing stuff around the place,” he said. He said the devices put staff under huge pressure and many of his colleagues using them in Ireland were eastern Europeans, with limited English.