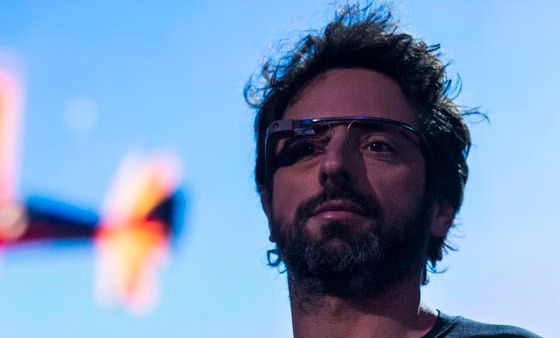 “When we started Google 15 years ago,” Brin says, “my vision was that information would come to you as you need it. You wouldn’t have to search query at all.” But for now, we get information by disconnecting from other people, looking down into our smartphone. Brin asks: “Is this the way you’re meant to interact with other people?” Is the future of connection just people walking around hunched up, looking down, rubbing a featureless piece of glass? In an intimate moment, he says, “It’s kind of emasculating. Is this what you’re meant to do with your body?”

Working on this project, Brin says, was revealing: “I have a nervous tic. The cell phone is a nervous habit — If I smoked, I’d probably smoke instead, It’d look cooler. But I whip this out and look as if I have something important to do. It really opened my eyes to how much of my life I spent secluding myself away in email.”

Emasculating? That’s a telling choice of word coming from one of the leaders of the boys world of Silicon Valley.

Are people meant to interact with each other through handheld devices, Brin asks. That sounds like a reasonable question — but not if the answer is that we’d be better off using devices attached to our heads.

Brin might be able to strike a manly cyborg pose, but just as I prefer not to talk to people who hide behind dark glasses, I would find it hard to fully engage with someone whose attention is simultaneously being drawn to passing digital interlopers.

“He doesn’t seem to be all here,” used to be a way of describing loss of sanity. Now it’s the new normal, thanks to the ever-expanding means through which we can conjure illusions of connection.

Presumably Google hopes that in its pursuit of world domination, Google Glass will be the tool that allows the search giant to leap ahead of Apple as their arch rival remains trapped in the emasculating world of handheld devices.

No doubt smartphones separate individuals from the people around them by providing access to a social world untethered from space and time. But the separation results from being disembodied — not because the vehicle of disembodiment is attached to the hand instead of the head.

At the same time, behind this innovation — like so many other purported advances — there is a false governing premise: easier is better.

The smarter Google gets, the dumber we become.

This isn’t just a Luddite sentiment; it’s what Google itself has discovered. Google learns how to improve its search algorithms by studying the way people use its software, but it turns out that this creates a kind of negative feedback loop. The better Google becomes in figuring out what people are looking for, the clumsier people become in framing their questions.

Tim Adams talked to Amit Singhal, head of Google Search, who described how Google can learn from user behavior and infer the quality of search results based on the speed and frequency with which a user returns to a search results page.

I imagine, I say, that along the way he has been assisted in this work by the human component. Presumably we have got more precise in our search terms the more we have used Google?

He sighs, somewhat wearily. “Actually,” he says, “it works the other way. The more accurate the machine gets, the lazier the questions become.”