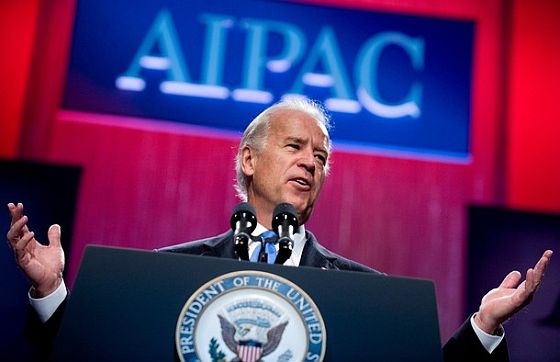 M.J. Rosenberg writes: It’s hard to watch the AIPAC conference for more than a few minutes at a time. For me, the worst part is the pandering (and lying) by Democratic politicians eager to raise money for their next campaign.

So far, Joe Biden has been the worst. He is heavily funded by the Adler family of Miami Beach (he even brought President Obama to their home for a fundraiser), one of the big AIPAC families. Here is Biden talking about how the head of the Adler klan and another AIPAC mogul gave him his “formal education” on the Middle East. (Not to mention all that money.)

And, of course, Biden (like John Kerry) knows better than his AIPAC speeches indicate. I have talked to him about Israel and Palestine. He can name the top Palestinian leaders in Fatah and Hamas and tell you the differences between their respective positions. He believes Israel needs to end the occupation and talk to Hamas. He would not dare say it publicly, although he has said it so often privately that it is amazing the media never reports it.

But Biden does what he thinks he has to because, for politicians like him (that is, pretty much all politicians), nothing is more important than keeping donors happy. Call him a hypocrite but he cries all the way to the bank.

The Republicans are different. Supporting the occupation and threatening war with Iran come naturally to them. They don’t need lobby money for their campaigns and they don’t get Jewish votes anyway. (This is not to say that they don’t like Sheldon Adelson’s money, just that as the pro-business party, they don’t need it). They support Netanyahu because they believe that the west needs to crush the Muslim world. They do not feign Islamophobia. It’s them. [Continue reading…]